Premier gets personal with Nova Scotians in final COVID update

McNeil noted the milestone was significant as it was the 100th time he and the province’s chief medical officer Dr. Robert Strang appeared together to give the latest update on the pandemic and vaccinations.

The premier was asked to reflect on the last eleven months and if there is anything he would like to have done differently.

McNeil said it was important for officials to recognize what they didn’t know about the virus, such as the asymptomatic transmission but overall, was proud of the response by Nova Scotians.

“When we started early on, there were so many unknowns for us. That’s why we acted very quickly and aggressively in shutting down parts of our economy. I think those decisions early on, with the acknowledgement of what we didn’t know, allowed us to be in a position where good parts of our economy are functioning as long as people continue to follow the public health protocols,” said McNeil.

Dr. Strang announced new precautions for travellers from Newfoundland who aren’t required to self-isolate such as long-haul truckers.

Beginning Sunday, COVID-19 testing will be mandatory for anyone arriving by ferry.

Strang also unveiled the locations of 10 community based vaccination clinics, which will be rolled out beginning March 8 in Halifax, New Minas, Sydney and Truro.

Residents of the South Shore will wait to rollup their sleeves until March 22 when a clinic will be opened in Bridgewater.

Seniors 80 years of age and older are the first eligible to receive the injection. MSI will contact those selected by letter to book an appointment.

The province is reporting two new cases of COVID-19, one in the Eastern and one in the Central zone to bring the total to 15 active cases in Nova Scotia.

McNeil said getting to know Dr. Strang was something good that came out of this pandemic.

“Good male role-models are hard to find and last March I found one. He’s an extraordinary Nova Scotian who I think, all of us, owe a great debt of gratitude to. I’m really proud, not only of what he’s been able to do here, but I’m really proud of the fact that I got to know the man,” said McNeil. “I want to say to all Nova Scotians, he may be a great public health doctor but he’s an even better man.” 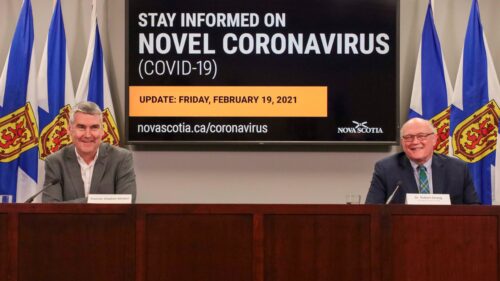 Strang was equally complimentary of McNeil.

“The premier’s been on the hot seat for a lot of things and I’ve learned a lot in the last year and I can understand why the premier is tired after seven years. But what I’ve seen is somebody who is principled and honest and as I said in my remarks, always, throughout the past year, has put the health of Nova Scotians first and foremost and I have great respect for the premier for that,” said Strang.

“I can’t tell you what it has meant to me over the last 11 months, for you generosity of spirit and your kindness towards me and your thoughtfulness of supporting me and asking me how I’m doing. At the same time you wrapped your arms around each other,” said McNeil. “You know, we take for granted sometimes this beautiful province we live in. We have beautiful scenery, we have magnificent views, we don’t often look back and say you know, the people are pretty good too. You demonstrated that in spades over the last 11 months and I am deeply grateful. My family and I are deeply grateful for the kindness that you’ve shown.”

McNeil asked Nova Scotians to continue to show that kindness and support to Iain Rankin when he takes office next week.