Power consumption at Kejimkujik is now as green as its renowned forests.

Since May, the national park and historic site has been generating enough power onsite using solar panels to meet the needs of campers in Jeremy’s Bay campground.

“The power that’s actually consumed by visitors and the number of visitors we have here is actually a hard category of greenhouse gas emissions to reduce because it’s up to individual choices and equipment and gear and stuff,” said Sheppard. “So, the principal for this one, for offsetting it, allows us to generate an equivalent amount of power so that when visitors come here, they know that their experience is powered by the sun and basically it’s a net-zero camping experience.”

Power is not stored at Keji but is sold to Nova Scotia Power and purchased back, creating a net-zero exchange. Generating over 12,000Kw per month, the 100Kw solar array is made up of 272 photo-voltaic panels and covers a 40 x 60 metre area.

The array is located in a clearing near the front of the park out of view of visitors on the site of a former weather station. 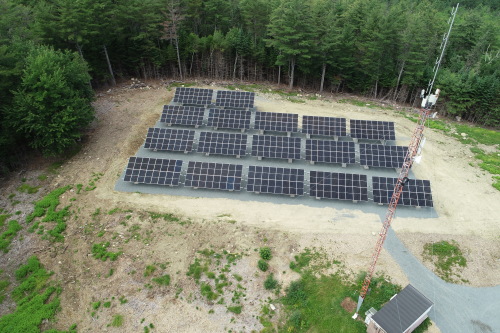 Sheppard says the location was chosen after consultation with Mi’kmaq partners.

“They were involved in the archaeology around this project. We did that collaboratively," said Sheppard. “They were very supportive of the benefits of this project but because we’re also a national historic site that’s designated so because of the Mi’kmaq cultural landscape, they were also interested in making sure that when you came into the park you didn’t see a big piece of infrastructure.”

The solar project was funded through an almost $600,000 Government of Canada investment to support greenhouse gas emissions reduction efforts and clean technology.

Sheppard estimates at the rate the array is producing power, that investment will be paid off in 20 years.

And perhaps most importantly, over their projected 35-year lifespan, the panels will be responsible for reducing greenhouse gas emissions by over 3,300 tonnes, the equivalent of taking 1035 cars off the road.

Sheppard says since the pandemic people have sought connection with the outdoors and it’s important to make that experience as enjoyable and green as possible.

“There’s a direct link between the visitor’s experience here in the campground and the knowledge that their experience is powered entirely by the sun,” said Sheppard. “That, for us, provides a really neat connection between a visitor understanding their visit in the context of the larger picture, not only of protecting a national park but the work to mitigate against climate change as well, while they’re here.”