Mount Forest resident Maddy Smith is hoping to save the last remaining slogan in town that says, ‘High-Healthy-Happy,’ which is painted across the water tower.

Smith is raising awareness through the sale of stickers, that look identical to the infamous water tower.

Smith said she’s not in it for the money, as she doesn’t even know the cost of one sticker yet, but said she wants to raise awareness because she read money would be included in this year’s budget to paint the water tower.

“So, my hope is to kind of say, ‘if you want to buy a sticker, I want you to also talk to your councillor about why the slogan makes you happy, why, you know, it’s important for you to keep it,’” Smith said.

Mount Forest Mayor Andy Lennox said the budget for 2021 hasn’t been passed yet, but roughly just under $1 million will go towards refurbishment of the water tower. 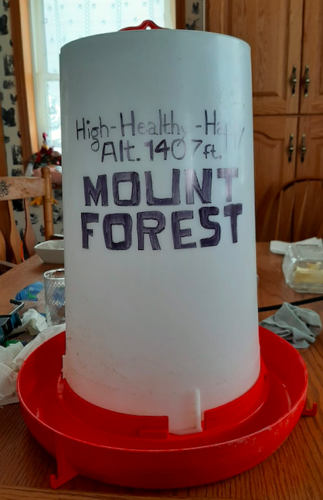 Maddy Smith raises chickens and quails, and said her idea for the sticker came from this bird water tower she made. Photo by: Maddy Smithefurbishment of the water tower.

“But the expectation is that it will be passed, and refurbishing of the water tower which will involve painting will be included in that,” Lennox said.

Lennox said that there is no reason to suggest that the slogan won’t remain on the water tower.

The slogan that says ‘High-Healthy-Happy’ used to be seen on the township’s two entryway signs last year, and then they were changed early fall to say, ‘Simply Explore.’

Smith said there is change happening and it really feels like no one is talking to the community about it.

“I think there’s a fear that the town is just going to switch the slogan and not tell anyone,” Smith said.

The mayor said he had a number of emails over the holidays of people expressing their desire to have the slogan remain.

“We just haven’t reached that point of decision at this time,” Lennox said. “There are certainly […] alternative viewpoints with regards to the connotations of the ‘High-Healthy-Happy’ that are very much present in the community as well. I understand that people don’t necessary wholly agree on that, and […] that’s fine.”

Smith said that she thinks that losing the slogan is a slippery slope to just becoming another sterile community.

She said the community is unique, and everyone has their own culture and sense of identity.

“And I think the ‘Simply Explore’ doesn’t capture that, it just white washes us as another, you know, small town that’s kind of been paved over, that’s what it feels like to me,” Smith said.

Lennox said the downtown revitalization committee did not want to see the, ‘High-Healthy-Happy’ slogan continue on the entryway signs, and council supported that, thus the change to the ‘Simply Explore.’ 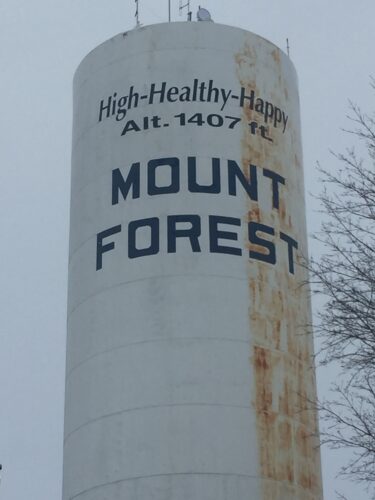 The town's water tower is the only remaining piece of landmark that says the town's slogan, 'High-Healthy-Happy.' Photo by Chris Holden. 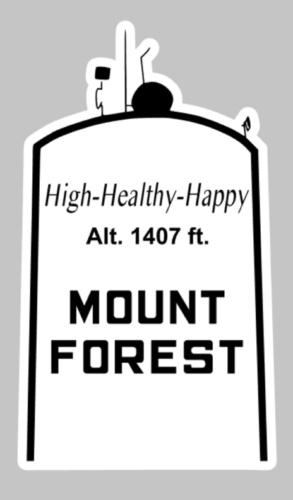