There are some residents in Mount Forest who are making it loud and clear that they are not happy about the town’s new entrance signs being changed.

Wellington North Mayor Andy Lennox says the change of the signs were made due to a grant from the provincial government.

“So we established a committee of community stakeholders to decide how to best utilize those resources and one of the projects that they tackled, or [they] thought was important, was refreshing the entryway signs,” Lennox said. “The committee I know had some significant debate about whether to include the ‘High-Healthy-Happy’ or not.”

After some lengthy discussion and debate, the committee decided to not include the ‘High-Healthy- Happy’ on the new entryway signs.

A petition for the old entryway signs gathered around 600 signatures, but was quickly shut down due to one of the signs being vandalized recently.

Lennox says that not everyone understands what the ‘high’ part of the slogan was intended to be.

Lennox says that some people associate the sign with another meaning.

“I was talking to another reporter last week and he was telling me a friend of his sent him a bunch of posts from Instagram where people were taking selfies in front of the sign with a joint in their hand,” he says.

Lennox says he honestly doesn’t know at this point what’s going to happen to the petition.

He adds that the slogan hasn’t gone away, as it still can be seen on the town’s most prominent landmark-the water tower. 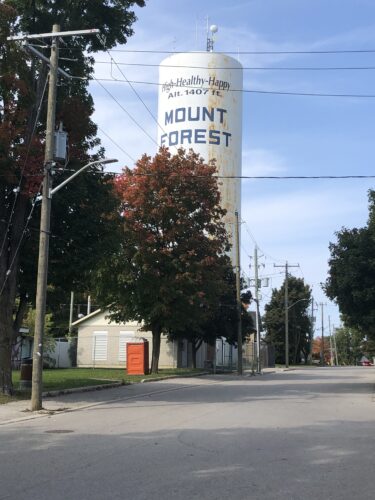 The old Mount Forest slogan can be seen on the town’s most prominent landmark: the water tower. Photo by Kayla Kreutzberg.