Visitors swarming to Queens to beat the heat are devastating one of the best beaches in Nova Scotia according to the area’s MLA.

Kim Masland says she’s been hearing from residents that conditions around Carter’s Beach are as bad as ever.

Once the hidden jewel of Queens County, people now come from across the province to lie on its white sand and swim in the Caribbean blue waters.

Masland went to see the beach for herself and was troubled by what she found.

“I was shocked,” says Masland. “When I started to walk down the path I was overcome by the stench of a huge pile of rotting garbage into an old buoy that had washed up, before I even got to see the beach.”

She’s heard from residents with concerns about cars parking along the side of the road, creating a situation that can be dangerous for emergency vehicles to get through and a lack of proper washroom facilities that has visitors climbing over the dunes into ecologically sensitive areas to relieve themselves.

The member of the legislative assembly for Queens-Shelburne says Carter’s Beach is not being promoted in any official capacity and has largely been discovered through word-of-mouth on social media.

“But people are hearing about it and they’re coming. So, we need a balanced approach to make sure that we are looking after the eco-system that is there, and still allowing people to come and enjoy the beach. If we don’t have the proper facilities, then we’re not doing our job,” says Masland.

The Region of Queens has offered to cost-share with the province the construction of a parking lot to direct traffic away from the secondary road.

But that suggestion was rejected by provincial officials. 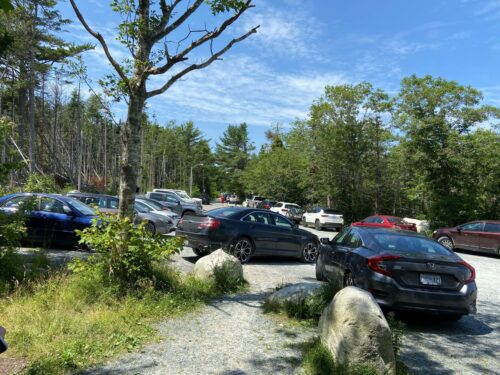 The Carter’s Beach Liaison Committee, composed of staff from the departments of Lands and Forestry and the Environment along with concerned residents and municipal councilor Kevin Muise, also proposed the province build permanent dug outhouses ahead of the summer 2018 season.

The Region of Queens offered to pick up the costs of having the outhouse septic tanks pumped on a regular basis, but that request too, was denied.

Masland wants the province to build a parking area to prevent congestion along the roads near the beach and to install more permanent washroom facilities.

Minister of Lands and Forestry Iain Rankin says the province has no plans to do either.

Rankin says parking issues are dealt with by the local RCMP detachment and his department’s focus is on protecting the ecologically sensitive area.

“We have piping plover habitat, we have rare lichen and moss and the list goes on and on of these things. That’s why there’s signage put up to try to keep people off those areas,” says Rankin. “We did agree to put the port-a-potties on site. We’ll continue to promote the pack in, pack out, and review any signage that we need to, to make sure the message is clear.”

Rankin says Lands and Forestry staff do come to Carter’s Beach on a regular basis to empty trash receptacles and will continue to do so.

He encourages people looking for parking and washroom facilities to instead travel to one of the other nearby beaches.

”We don’t want to add infrastructure to entice more traffic to the area. We try and promote Summerville and Thomas Raddall as the areas that have full services and allow for more recreation,” says Rankin.

Region of Queens mayor David Dagley agrees with the minister’s assessment that the services do exist in the other two parks, but says convincing people to change their habits is the real challenge.

“People make a decision as to what beach they want to visit and that’s difficult to control,” says Dagley.

He says even if non-local traffic was barred from Carter’s Beach Road people would still find their way to the beach.

“There’s access points on a number of short roads,” says Dagley. “Carter’s Beach is accessible from all ends and in the middle, and it’s unfortunate.”

The mayor says he shares Minister Rankin’s concerns about protecting the fragile ecosystem at Carter’s, which is why the infrastructure is so badly needed.

“We’re hoping for a solution soon. Because the longer this lingers, the more degradation we see in the dunes,” says the mayor.

Masland says the issues at Carter’s Beach existed before she took office and she has raised them repeatedly with the ministers involved since she has been in the legislature.

She says she will continue call on government to put the infrastructure in place.

“Step up to the plate, do your job, put in the facilities, put in the parking that we need and we won’t have to listen to me holler in the legislature every time.”