After modelling the climate plans of the four major parties in this election, Clean Energy Canada announced the Liberals have the only plan they know is achievable.

“We really found that the Liberal platform is both ambitious and has the plans, the details, the actions of how it is going to reduce emissions,“ explained Merran Smith, a former Cortes Island resident and executive director of Clean Energy Canada.

Clean Energy Canada is a climate and clean energy program within the Morris J. Wosk Centre for Dialogue at Simon Fraser University.

Her team calculates that the Liberal could reduce emissions to 40 percent or more, from 2005 levels, by 2030.

While the NDP and Green plans claim to be more ambitious, Smith said there wasn’t the detail on the policies and actions they plan to take. This makes it difficult to assess them.

She added that while it is positive that the Conservatives produced a climate plan, it is weaker and contains caveats that mean some actions might not be taken.

"It is actually taking us backward," said Smith.

One thing that Clean Energy Canada has noted over the past 18 months, is the degree other countries are integrating their climate and economic policies.

"Our exports are going to be evaluated by the amount of carbon solutions in it, which means if we are going to be successful we need to reduce our carbon emissions," said Smith.

One of the areas where Smith saw the Liberals far ahead of the other parties was investing in the low carbon economy of the future.

"We don't see those kinds of details in the NDP or Green platforms. With the Conservatives, we really see a focus on investing in some of the industries of the past," she said.

CKTZ News emailed the North Island — Powell River candidates from all four parties on the morning off Wednesday September 8th.

The Greens and NDP normally respond to CKTZ's queries within a couple or three days; the Conservatives rarely reply.

Only the Liberal Party replied.

“Mark Jaccard, who works as an advisor to the BC NDP government on climate policy, agrees that the Liberal climate plan is the only plan that is both ambitious and realistically achievable. He gave our climate plan an "A", the Conservatives a "D", with both the NDP and Greens receiving a failing grade,” he emailed. 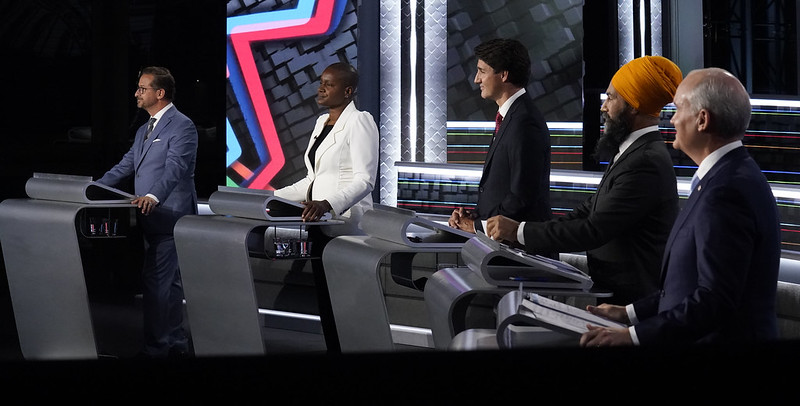 Prime Minister Trudeau was referring to Clean Energy Canada's report in his repeated references to an expert review of his climate plan during the English leadership debate on September 9th.

"If you look at what the experts and the climate scientists and the economists have said, we’re the ones with the strongest plan to fight climate change," he said.

NDP leader Jagmeet Singh replied, "I don’t accept that, first of all. I don’t accept at all. We’ve got a plan, and a strong plan."

Green Party leader Annamie Paul said, "I think the five PhDs and our shadow cabinet who put together our Green Recovery Policy would disagree with you, with the experts."

While Conservative leader Erin O'Toole did not directly respond, he made numerous references to his party's detailed climate plan.

Smith gives a detailed analysis of all four party's climate plans in the podcast.