Lack of housing in Queens holding back call centre expansion

One of the largest private sector employers in Queens County is asking where his employees will find a place to live.

President and owner of Global Empire Corporation Moe Nashman made the comments at an event celebrating the grand opening of their call centre on White Point Road in Liverpool, Monday.

The call centre employs 120 people and Nashman says he would love to double that number.

“There’s a lot of people that want to work and for me to bring them from out of town into town, I can offer them employment and I know Sobeys and all the other grocery stores can offer them food, we just need to know where they live,” said Nashman. “If I could offer them housing, I could fill this place in five minutes.”

Liverpool is the company’s first call centre in Canada.

As he provided a tour of the refurbished facility, Nashman pointed to the rows of cubicles that filled half a large, open workspace. 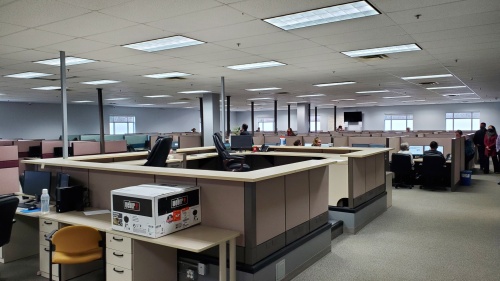 He says the company has already ordered the furniture and equipment to fill the rest of the space.

“I would like to start hiring by the end of the year for the second half, but I do need to figure out the accommodation/housing for employees,” said Nashman.

Most of the call centre employees live within the Region of Queens but roughly 20 commute from outside the municipality with some travelling as much as an hour and a half each way.

Nashman is hoping to speak with provincial officials to learn what can be done to make housing more available.

“In five minutes, I could load an airplane full of people that want to come to Nova Scotia. Where they [are] going to live, I have no idea and that’s the biggest problem,” said Nashman.

He says an influx of a couple of hundred people to the area would benefit the region and the province as a whole.

As the tour concluded, Nashman added the company is still looking to hire another 10 people this round and is accepting applications.