In the midst of several city-based temporary homeless shelters closing and the spring season returning, an anti-poverty organization is demanding that Toronto City Council decriminalize tent encampments in public spaces.

As city councillors returned to one of the first in-person meetings since the beginning of the COVID-19 pandemic, the Ontario Coalition Against Poverty(OCAP) organized a press conference demanding the repeal of bylaws against tent encampments in parks.

While the city has provided shelter hotels, temporary beds and warming centres for the unhoused, the organization said it falls short by more than 1500 beds, leaving several individuals with no alternative than sleeping in public areas.

"A lot of the survivors you see here on the streets, are survivors of the Residential school era," said Stoverman. "It happens to all people, but we know here in Toronto there's an overwhelming majority of folks on the street who identify as First Nations people."

Stoverman said she wants to remind individuals that no one is homeless, just houseless because of the current system of the city.

"We are not homeless peoples, we have a home, [and] people need to remember that," she said. "Turtle Island is our home." 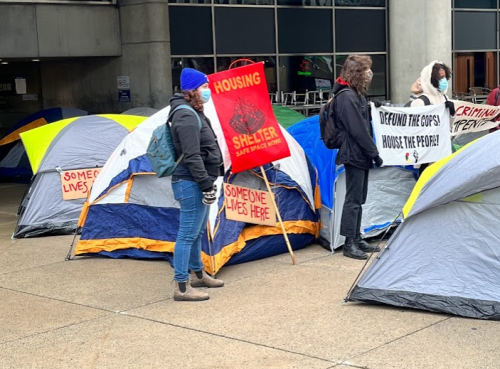 Tents were pitched in front of city hall as the press conference commenced. OCAP said the unhoused will have no choice to sleep in public areas in the warmer months. Photo by Daniel Centeno/CJRU.

Gru, another speaker, has lived through the city's shelter system, being unhoused for more than eight years. He said the uncertainty of each night and what may transpire continues to be his biggest challenge.

In the interim, the city is planning to gradually decommission at least five shelter hotels. Phase one of this plan was discussed during a March 24 council meeting. There are about 27 of them operating at the moment.

These hotels give shelter to more than 3000 individuals per night, according to the city of Toronto website.

In the summer of 2021, the introduction of the bylaws that made sleeping in public spaces illegal.

Police officers entered areas like Trinity Bellwoods Park and Lamport Stadium to dismantle and uproot individuals living in tents. Fences were installed to prevent individuals from staying or returning to the parks.

The events caused uproar from organizations like OCAP and others, especially as videos of violent clashes between police and protesters circulated online.

Listen to CJRU's coverage of the OCAP press conference here: