To capture Monet’s work in a more immersive experience, interactive elements including music, lights, and elongated screens are used to display the paintings.

The interactive elements were used to provide "reflections" of the work, instead of having the physical objects themselves, according to the exhibit's art consult, Fanny Curtat and experience designer Félix Fradet-Faguy.

"You don't have an aura of an original, so you have to add more to the experience and play with the advantages these tools give you," said Curat. 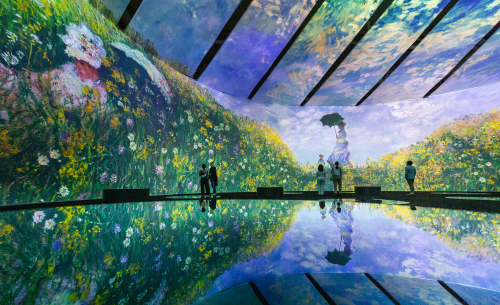 The Infinity Room is one of the defining aspects of the Beyond Monet Exhibit. (Photo is courtesy of Tamar Gibbert via Monet Toronto)

Among the curated works on display is Water Lilies, which is considered one of Monet's most well-recognized paintings.

Curtat and Fradet-Faguy said the exhibit is meant to make Monet's work more accessible to the public and peak further interest in the art world.

"Like anything, it's hard to brush anybody with one stroke and just say the whole art world is having one reaction," said Curtat. "An exhibit like this is an opportunity for people who don't think art is for them, [and] who might be intimidated by museums."

Curtat and Fradet-Faguy hope visitors to see both the beauty of the work, as well as have a deeper understanding of Monet's creative and thought process.

Monet was a French painter with over 2000 works completed throughout the late 19th century and early 20th century.

He is considered the forerunner of impressionism in painting.

The Beyond Monet Exhibit is on now at the Metro Toronto Convention Centre.