‘I wanted to make sure that I wasn’t quiet’: Student plans protest in response to US Supreme Court decision on abortion

Pro-choice activists plan to march in Sackville on Sunday to protest the US Supreme Court’s decision to overturn Roe versus Wade.

That ruling means women no longer have a legal right to abortion in the United States.

Jenna Auguscinski, a student at Mount Allison University who is organizing this weekend’s march, says she fears criminalizing abortion will increase the suicide rate among women.

“I think it's a huge issue and I think people are being pretty quiet in Canada about it, so I wanted to make sure that I wasn't quiet about it,” she said.

The province only subsidizes procedural or surgical abortions in three hospitals in New Brunswick, two in Moncton and one in Bathurst.

Under the Medical Services Payment Act, regulation 84-20 restricts those procedures to approved hospitals. Activists have called on the province to scrap that regulation.

“In New Brunswick, if you need an abortion, and you can't receive it in a hospital, the province doesn't pay for it,” said Tasia Alexopoulos, Mount Allison’s Sexual Violence Prevention and Education Coordinator. “That can be 600 to $1,200 out of pocket.”

Listen to the full interview with Auguscinski and Alexopoulos from Jun. 29, 2022:

The federal government previously withheld $140,000 in health transfer funds to penalize the province for violating the Canada Health Act over inadequate abortion services, although Ottawa reportedly reimbursed that money to help the province cope with the effects of COVID-19.

Premier Blaine Higgs, a self-described “pro-life” politician, has stated that access to abortion is adequate in New Brunswick.

Hospitals are meeting demand for abortions and the non-surgical abortion pill is getting “widespread use,” he said Thursday, citing New Brunswick’s regional health authorities. 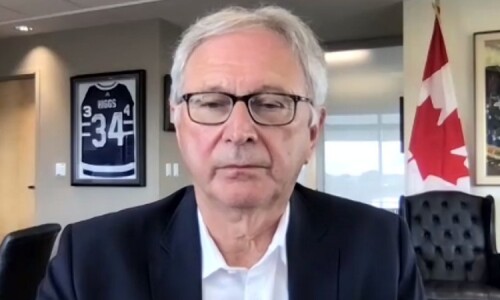 “We believe that, you know, we're meeting those needs, and that's the advice that I'm getting,” he said in response to questions from CHMA during a media conference via Zoom.

Alexopoulos said barriers to abortion medication include doctors who refuse to prescribe it. Higgs said that’s out of his hands.

“I can't, you know, be responsible for the medical profession and what they want they do, in relation to their personal practices,” he said.