On Saturday, nearly 200 people gathered on the Halifax waterfront to stand in solidarity with Iranians protesting their government regime’s oppression of women.

Protestors also carried photos of Mahsa Amini, the 22-year-old Iranian woman who was arrested in Tehran for wearing her hijab "improperly" in accordance with Iranian rules. She was placed in detention where she was beaten and died three days later on Sept. 16, 2022. Since then, an uprising of protests in Canada and around the world have taken place in solidarity with Mahsa Amini. This is the third rally in Halifax to date.

"This revolution is a grassroots women-led revolution, the first that we've seen of its kind in history. We're trying to push for is an end to the gender apartheid in Iran," said Mackay.

Nazanin Afshin-Jam Mackay has advocated for human rights for about 20 years. Photo by Sara Gouda.

Human rights activist Nazanin Afshin-Jam Mackay says she has advocated for human rights for 20 years. She is also president and co-founder of Stop Child Executions as well as the founder of "The Nazanin Foundation."

"I was born in Iran; we fled when I was one because of the revolution that happened in 1979. My father was imprisoned and tortured by the revolutionary guards, so that's why we came to Canada. Having lived in a free and democratic country, I want to see the same thing for the people in Iran," she said.

Afshin-Jam Mackay was one of the guest speakers at the rally. She spoke about the Iranian regime saying peaceful protestors who opposed the regime were being "barricaded, beaten with batons, shot at and imprisoned."

"The Iranian regime has been repressing the rights of people for the past 43 years. They suppress the freedom of expression. Anytime you dissent, you can be imprisoned, tortured, or even executed. There are many journalists and even lawyers defending the rights of people inside the prison. Women are treated as second-class citizens, their rights are, are basically nonexistent. There are homosexuals who are persecuted just for being homosexual, you are subjected to the death penalty," Afshin-Jam Mackay said.

Afshin-Jam Mackay said she is happy that the Canadian government is listening to Iranian people in Canada, and is taking steps against this regime such as sanctioning 50 per cent of the IRGC leadership, which are about 10,000 members.

However Afshin-Jam Mackay said she would like the IRGC in its entirety to be listed, and have all members' assets frozen as well as have travel bans on officials of the Iranian regime.

Protestors are also asking Canada to pressure other G7 counties to cut diplomatic and economic ties with the regime, closing their embassies, expelling their diplomats, as well as cutting trade ties until Iran holds a fair and free election. 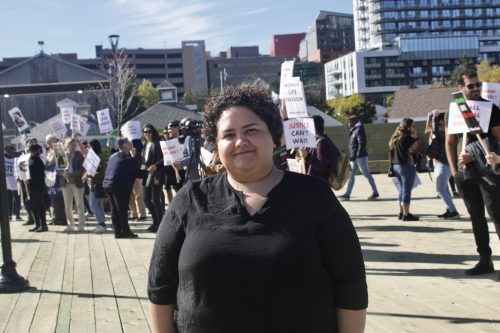 Sara Mirzaei is an Iranian volunteer who helped put together Saturday's rally. Photo by Sara Gouda.

Sara Mirzaei is a volunteer at the rally who joined to spread information about what is happening in Iran. 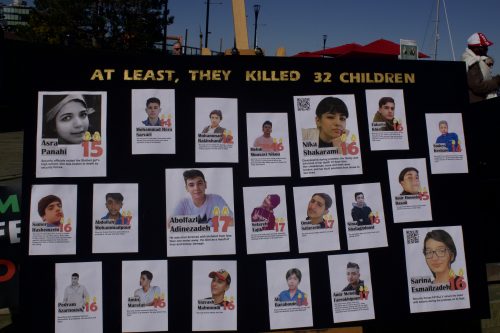 Guest speakers shared stories of children and victims that were killed by speaking up or joining peaceful protests against the Iranian regime. Photo by Sara Gouda.

Another volunteer, Amir, who asked CKDU to withhold his last name for safety reasons, said he is glad that this cause is getting more attention from Western media.

"It is great to see that all mainstream media are trying to get a better handle on what's going on Iran. More things can be done for sure. Now we see how many people across the world from different backgrounds with different ethnicities are standing in solidarity with us and I would like to also, specifically thank Nova Scotians for being our voice right now," he added.

Earlier in October, Prime Minister Trudeau announced the government will be Investing $76 million to strengthen Canada’s capacity to implement sanctions and ensure they can move more quickly to freeze and seize sanctioned individuals’ assets, including through a dedicated bureau at Global Affairs Canada and additional support to the RCMP to investigate and identify assets and gather evidence. 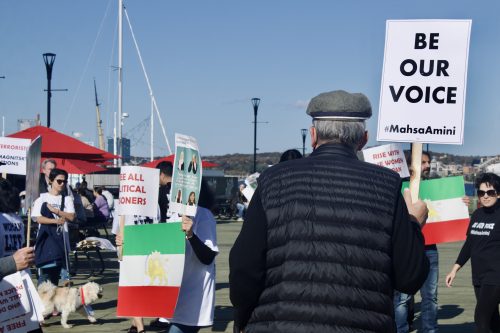 Members of the crowd chanted "zan, zendegi, azadi" which translates to women, life and freedom in Farsi. Photo by Sara Gouda.