After last year’s successful run at weekend street closures in downtown Elora and Fergus, Mayor Kelly Linton said they will be happening again this summer.

Linton said certain streets will be closed from Saturday morning to Sunday evening, the same hours as last summer.

“So, in Elora, most of the downtown streets, so, Metcalfe [Street] south of Geddes [Street] and West Mill [Street] are going to be closed to traffic from May till October,” Linton said.

Linton said the Badley bridge will be kept open.

“So, when you’re coming down the hill, you turn right, and there will be barriers and planters, and we’re going to be taking the parking spots out on East Mill Street, and making sure there is lots of signage, so that pedestrians and folks [heading] down to Elora can go and check out the restaurants and shops on East Mill [Street],” Linton said.

He stressed that they must keep that connecting link open and keep traffic flowing.

Linton said in Fergus last year, a portion of St. Andrew’s Street was closed to traffic on the weekends but it didn’t really work out.

“To be honest, we tried it for three weeks and you know, people got frustrated, there weren’t enough people coming down and walking on the streets to justify us closing the whole street, so, we adapted pretty quick and changed directions on that,” Linton said.

Linton said what worked better was shutting down Provost Lane and making it into a patio area, which will be happening again this summer. 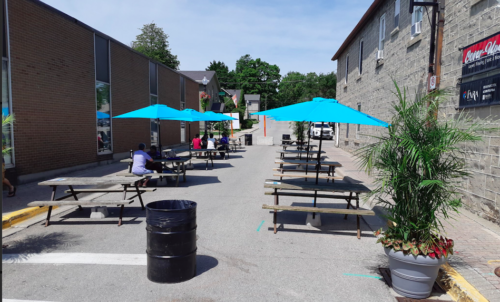 Provost Lane downtown Fergus will be shut down again this summer for pedestrian-only weekends. Photo by Austin Cardinell.

He said the Fergus Business Improvement Area (BIA) has some great plans to really beautify the area.

Linton also said a patio bylaw will be coming to Centre Wellington council this month.

He added that people really want to get out and sit around on patios downtown in both Fergus and Elora and with COVID-19 still happening, it’s important the township has outdoor dining opportunities for some of the businesses.