Exactly one year after the launch of their Needs Assessment Report, LGBT YouthLine launched Do Better, a report outlining seven recommendations for change in Ontario. Published on Mar. 4, it explores gaps in health, suburbs and rural areas, grassroots organizing, youth-led decisions, political power, building standards and training. Hayley Moody of LGBT YouthLine took time to talk with CJRU about this work and their upcoming virtual launch tour. 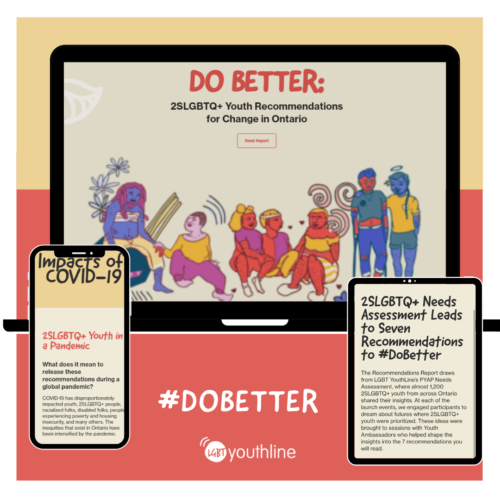 The "Do Better" report is being released this spring. Graphic courtesy of LGBT YouthLine

LGBT YouthLine is a Queer, Trans, Two-Spirit youth-led organization that affirms and supports the experiences of youth across Ontario. In addition to the new report, they run an anonymous peer support line, a number of leadership programs and more.

Their website dives deeper into each of the report’s recommendations. They introduce the problem, share quotes from young people and tangible examples for making change. Ultimately, the report’s target audience are people in decision-making roles. This includes elected officials, service providers, school boards, community stakeholders, and youth-serving groups.

“Everyone in Ontario and beyond can definitely learn something from this report. And take pieces from this report and do better… [but] a lot of the recommendations, we’re asking for higher-level and systemic changes,” Moody says.

While the report addresses complex changes, she notes that much more change must happen beyond these seven recommendations. To create the Do Better report, LGBT Youthline asked 2SLGBTQ+ youth in Ontario about their hopes and dreams. Moody says that many responded with answers rooted in survival. For example, decision-makers listening to youth, not making decisions on their behalf and providing gender-neutral bathrooms. 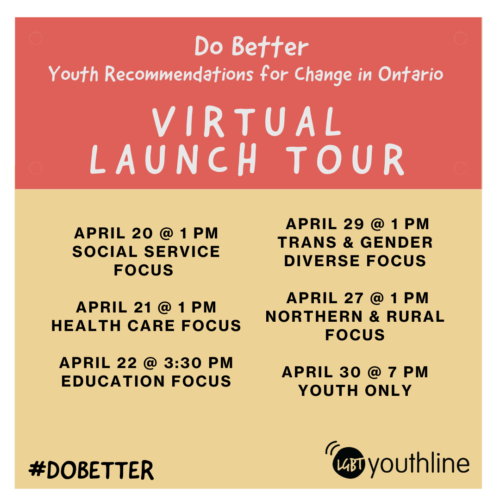 LGBT YouthLine is running a virtual launch tour for the new "Do Better: Youth Recommendations for Change in Ontario" report. Graphic courtesy of LGBT YouthLine.

“It is disheartening to think that after all these conversations about dreaming and different futures, we’re still stuck in a place of survival,” she explains.

Moody adds that this is not unique to the needs assessment and Do Better report. Similar conversations occur at virtual events, leadership programs and more.

“It’s not okay that we’re in 2021 and the recommendations are so basic, I would say… they’re not revolutionary. This isn’t the first time people are having these conversations. Of course 2SLGBTQ+ youth and 2SLGBTQ+ community in general have been advocating for and talking about these changes forever,” Moody says.

Moody says that close to 1,300 people have contributed this report over the last two years.

To keep the conversation going, LGBT YouthLine will be hosting a virtual launch tour in April. This online event will consist of seven youth panels, one per recommendation. The hope is that attendees are familiar with the Do Better report and can dive deeper into the topic during the panel.

To hear more from Hayley Moody, listen to the interview below: