Bargain hunters coming to Queens looking for those “back of the garage finds “will have to look elsewhere this year.

The 30-mile Yard Sale has been called off, another casualty of the COVID-19 pandemic.

The event is coordinated by staff at the Caledonia Visitor Information Centre (VIC).

Manager Doreen Mansfield says they reached out to previous participants to gauge the interest in holding the yard sale this year.

“Nobody was interested because they didn’t want to bring a lot of strange people into the community because they say there’s only traffic jams in Caledonia twice. One is yard sale day, the other is when there’s exhibition going on," says Mansfield.

For the past 15 years the 30-mile yard sale has been held traditionally during the first weekend in August.

Mansfield says some years the name falls short of the area the sale actually covers.

“It runs anywhere from South Milford right straight through to Liverpool and Bridgewater, down that way," says Mansfield. "So, it covers, probably more than 30 miles when you get right down to it.”

The yard sale is one of the major fundraising events for the Caledonia VIC.

Sellers pay five dollars to have their address listed on a map showing the locations of all the participating yard sales.

The map is widely distributed throughout the county.

Combined with the barbeque that is held at the VIC during the sale, the event raises about $1,000 each year. 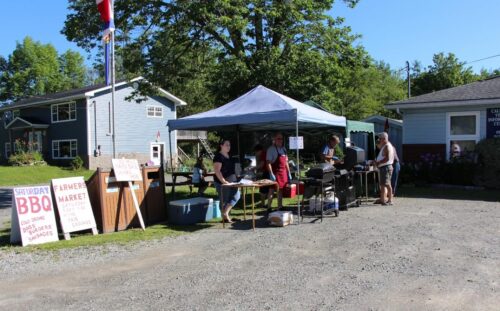 Barbeque at the Caledonia VIC.

The coronavirus has also cancelled their annual dinner theatre, which usually adds another $2,000 to VIC coffers each year.

The VIC will still receive some funding from the province and support from the Region of Queens municipality.

Aside from a Canada Summer Jobs student hired each year, Mansfield is the lone full-time employee as the centre relies on the 10 to 15 community volunteers to keep the doors open.

Each year, the Caledonia VIC operates from Victoria Day in May until Thanksgiving weekend in October.

During the summer months, it would normally open seven days a week but because of COVID-19, they are closing Sundays and Mondays this season.

Mansfield says while she still sees some people coming from the Maritimes, the number of tourists passing through has taken a steep drop this year.

Many visitor information centres across Nova Scotia did not open their doors due to the pandemic and Mansfield says that makes the Caledonia VIC even more vital to the area.

“Our motto is we’re in the middle of everywhere. So if you’re going to Digby from Bridgewater or Lunenburg, Liverpool, you’ve got to come through here unless you go up through the number 10," says Mansfield. "But, the Route 8 is the major route across the province on this end. So, we’re right here, catching everybody that wants to go by and here for people that want to stop in.”

Mansfield says some people have decided to go ahead with their yard sale plans and the Caledonia VIC is happy to post those on their Facebook page.

But as for the 30-mile yard sale, she looks forward to coming back bigger and better next year.

*A previous version of this story incorrectly indicated the Caledonia Visitor Information Centre is closed Mondays and Tuesdays. It has been changed to reflect the correct hours. Apologies for the error.