When the Chum salmon returned to Cortes Island four years ago, they entered every creek. Approximately 1,050 swam up Basil Creek this year, but the numbers were far lower everywhere else. Some Whaletown residents saw Chum in their creek, these did not make it to the official tally – which is zero. Despite the disappointing returns, Streamkeeper Cec Robinson describes 2020 as a year in which steps were ensuring future Chum runs.

Why was the Basil Creek run different?

The initial discussion, in the podcast above, centres around the reasons why the Basil Creek run was so much better than the others.

Was it because of the extensive work that Sean Wong and his crew did at the mouth of the creek in 2017?

“I don’t think so. The work that he did was carried out at Basil Creek and then essentially duplicated for Whaletown. So there you have the two extremes. Basil had a good return and Whaletown, the other place where work was done, had nothing,” said Robinson.

The deep pools and other salmon enhancements that went into Basil Creek were not repeated in Whaletown.

“I agree, the difference being that Whaletown Creek didn’t need it. Basil Creek, particularly below the road where that work happened, had been straightened out (channelized) over the years. It didn’t have a lot of curves, bends and hiding spots left in it. Whaletown Creek is pretty good that way. It has not been affected by human activity in the same way,” Robinson responded. 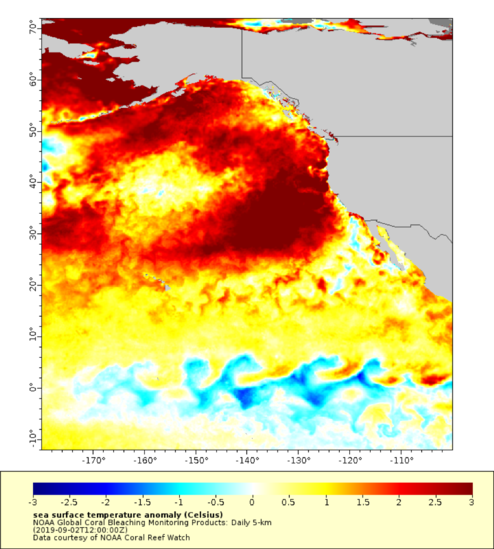 Photo credit: The new marine heatwave off the West Coast stands out in this map of sea surface temperature anomalies, with darker red denoting temperatures farther above average. The highest temperatures shown are more than 5 degrees Fahrenheit above average. Image from NOAA Coral Reef Watch, which corrects effectively for cloud cover.

When he approached the Department of Fisheries about the discrepancy, they said the same phenomenon occurred all up and down the coast.

“Some runs are very strong. Others were just … missing. It is a big question, as to exactly why,” said Robinson.

The DFO’s best thinking is that this phenomenon arises from another marine heat wave like the “Blob” which “peaked through 2014 and 2015 with temperatures close to seven degrees Fahrenheit above average.’ According to an article from NOAA Fisheries, which Robinson emailed Cortes Currents after our interview, the “warmer conditions during “the Blob” left lesser-quality food available to young salmon entering the ocean. It also shifted predator distributions in ways that contributed to low returns of salmon.”

Robinson explained, “Apparently it has very defined boundaries. So that moving just a short distance, you travel from normal temperatures to excessively warm waters. So it could be that the fate of the different runs depended on whether they got tangled up in that warm water.”

Ensuring there will be future Chum runs

The Cortes streamkeepers are taking steps to ensure there will be future Chum runs.

The salmon enhancement work in James Creek has been mentioned elsewhere.

“We put a great deal of effort into putting some spawning gravel there and that project still has to be completed,” said Robinson.

Two incubation boxes, with 40,000 Chum eggs obtained from the Tla’amin Nation hatchery (via the Klahoose), were installed in Whaletown Creek.

“The huge advantage there is that the eggs develop in the stream and hopefully the fish will be completely imprinted in that stream. There is a pretty good certainty that, if they survive, they’ll be coming home again,” said Robinson.

He is not certain that fish raised in a hatchery and spending maybe two weeks before they head out to the ocean, have as strong a bond to their streams.

These 40,000 eggs were originally intended for Basil Creek but, after learning the size of the respective runs, the DFO  agreed to let them be placed in Whaletown Creek instead.

“I was amazed that the DFO was capable of changing direction so quickly. … We made a request to put all the eggs in Whaletown Creek … and I didn’t think we would get permission on such short notice, but we did. I think credit certainly goes to Dave Ewart, who is working with streamkeepers here.”

Robinson hopes the eggs can come from Cortes salmon, but should that not prove possible Fisheries has determined that “eggs from the Tla’amin hatchery are genetically the same.”

“Next year is the fourth year cycle from when we released the first Chum (from the Klahoose hatchery) … We released, I think it was 30,000 into Basil Creek. So we’ll see how many survived,” said Robinson.

“As for Whaletown Creek and the others, which did so poorly this year, even in any old average year it was better than this year,”