Supporting Our Unhoused Neighbours is a recently-launched fundraising campaign by social venture Building Roots and the volunteers of Encampment Support Network (ESN). CJRU spoke with Building Roots’ outreach coordinator Hannah Backman about their campaign, the interlocking nature of food insecurity and other social disparities, and how they’re responding to the pandemic.

Backman says that tackling food insecurity in Moss Park was at the heart of Building Roots since it began in 2013. While their reach in Downtown Toronto East and the scope of their work has expanded, all their programming aims to build socially cohesive communities.

“We work with communities very closely and assess community wants in a very whole way… We believe that community members are experts in their own lives and experiences. So with that understanding, community members, volunteers, partners, local businesses partake in creating strong, resilient, connected communities,” she explains.

The Supporting Our Unhoused Neighbours campaign is raising funds for the Moss Park encampment. On Nov. 21, Building Roots will be distributing over 100 sleeping bags and emergency blankets at the encampment thanks to a donation from their corporate partner, Harvey Kalles. Building Roots and ESN are now inviting the general public to contribute. Outlined on the website, they're accepting monetary donations, a list of winter items, as well as volunteer work. 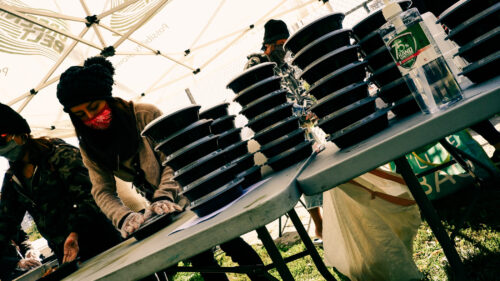 While the campaign is new, Building Roots and ESN have been collaborating for some time. Backman explains that the groups teamed up to host Food with Friends: Moss Park Encampment Action Day on Oct. 17. For the action day, Oh She Grows donated 120 meals from Tiffinday, a Canadian food business specializing in vegan South Asian stews. Building Roots distributed these meals and the conversations from their October action day informed the design and objectives of their current campaign.

Backman adds that their campaign is aligned with the six demands recently made by ESN, Toronto Overdose Prevention Site and the Shelter Housing Justice Network. The demands call for immediate action by the city in the form of investments in affordable housing, an eviction moratorium, ending the criminalization of encampments, robust overdose prevention and harm reduction services and providing winter survival gear for those in encampments. 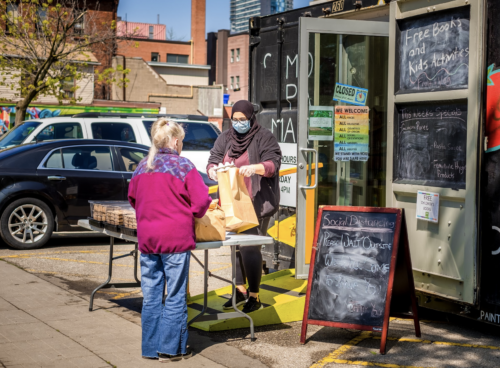 “There’s an estimate that more than 1000 people are living outdoors in Toronto. I always bring this back to issues of food insecurity because we know that a lot of folks are choosing between paying rent and purchasing healthy, nutritious, dignified food. I think having permanent housing is an essential part of feeling safe, comfortable, and being part of a community,” she says.

She also makes the distinction between permanent housing and the shelter system, noting that there are a variety of consequences to leaving a neighbourhood and entering the Toronto shelters, Better Living Centre or shelter-hotels in other areas. Many unhoused people have spoken out about the isolation and disconnect created by the shelter system and Backman echoes these concerns. Until the city acknowledges these shortcomings, Building Roots, ESN, and like-minded Torontonians will have to supply winter warmth and safety to the encampments.

To hear more about the philosophy behind Building Roots, their campaign and more, listen to the interview with Hannah Backman below.