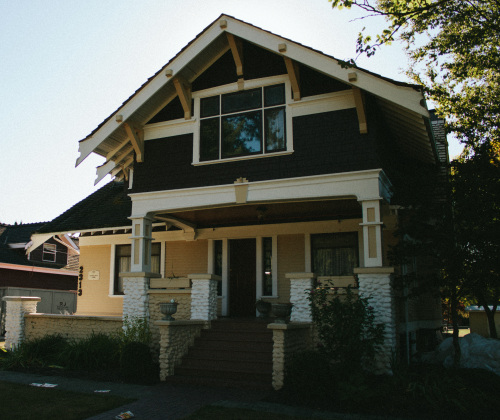 A photograph of Trethewey House, a heritage site in Abbotsford.

Abbotsford, BC is the largest municipality in the Fraser Valley Regional District, an exurban area about an hour east of Vancouver. It’s growing very quickly, with a 2013 City of Abbotsford Official Community Plan expecting 40,000 new residents within 20 years.

The citizens of Abbotsford held a well-attended Black Lives Matter protest last spring, but the municipal government routinely denies that racism is a problem in the city. Photos of known KKK members hang on museum walls. There is almost no representation for people of colour on city council. And the white and brown communities in Abbotsford are segregated. As CIVL Radio learned through the production of this show, people of colour in the community don’t feel heard or included.

While the accomplishments of known white supremacists are still documented, framed and distributed, both historical and ongoing racism in Abbotsford remains hushed. This creates tension between white and non-white people in the valley and can have dire consequences. Why is nobody talking about it? And what does this silence say about the community?

Last July, a business owned by Abbotsford Councillor Brenda Falk and her husband incited controversy when they left an “All lives matter” comment on a Downtown Abbotsford Instagram post that supported Black lives. The business, Tanglebank Gardens, is a family-owned farm and restaurant in Abbotsford.

“Let’s treat people with respect and dignity no matter what colour or gender they are,” read the comment. “Treat people the way you want to be treated and let’s stop the BS.”

The comment was quickly challenged by Sharanjit Kaur Sandhra, a sessional instructor in the University of the Fraser Valley History department, co-chair of the Race and Racism Network, and coordinator for the South Asian Studies Institute at the university.

“So... supporting people of colour is BS eh?” she tweeted on July 24, mentioning the company, council, and Faulk’s party, AbbotsfordFIRST. Over six months later, she’s still not satisfied with the response.

“To this day there have been young people speaking out on social media demanding accountability,” she says. “There have been petitions signed, and there has been nothing but ignoring and deflecting and gaslighting from our mayor and councillors.”

“All the committees, even councillors and the mayor, it’s a very homogeneous representation of our community, and therefore they can only know what they’ve lived. They only know their communities, their churches, their culture, so how can you even begin to fathom what my lived experience is?” she says.

“As a Sikh woman having lived here for 32 years, how can you even begin to understand me if you’re not even willing to listen to me when that includes a critique of you?”

Abbotsford News covered the incident, sparking debate in the comment section. And this kind of division and racial division within the city is not uncommon. The Tanglebank comment isn’t an isolated incident, says Sandhra.

In reference to another, broader issue, Sandhra is deeply troubled by the “segregation between white Abbotsford and brown Abbotsford.”

“I’ve been told by my white friends that when they first moved to Abbotsford, they were told by their white realtors to not go to a specific part of town, West Abbotsford, because it’s a shithole lived in by a majority South Asian community,” she says.

Christina Reid, executive director of Heritage Abbotsford Society, says she has heard the same thing. She says there is “really an east-west divide” between the mostly white community in the east and mostly South Asian community in the West.

“I know a person who, when they were moving here for a job, were told, ‘You wouldn’t want to live in West Abbotsford because that’s where those people live,” she says.

Abbotsford does have one person of colour on council, but that’s not enough to create significant change, says Sandhra.

“When you are part of a machine and a system of white supremacy, having one brown face, black face, or Indigenous face will not solve the problem. In fact, it’s even more difficult for those people to push back against a machine that’s been there for a century,” she says.

Kelly Chahal is currently the only person of colour on Abbotsford City Council. She’s Malaysian, but her great grandfather came to Canada 100 years ago and her family has roots in the Fraser Valley.

“Throughout my life and my career, I personally have felt that I had to work a little bit harder to get myself noticed. I had to speak a little louder and qualify myself a little bit more,” she says. “It shouldn’t be that way, but we all know that we’ve had a history of systemic oppression, and they continue to be done that way, and things need to change.”

She realized at a young age that having cultural and racial diversity in any organization is an asset, and says that the lack of diversity on the board puts its members at a disadvantage.

“I agree that there needs to be diversity and we need to represent the community, and we don’t right now,” she says.

“When I look at my own South Asian community, there’s so many differences among us, but the nuances and difference is what will help us grow because we have different thoughts and different views and can respectfully discuss those. That way, we’re not only really affecting change, but we’re also sending a message that we represent the community,” she says.

Being the only woman of colour in the room isn’t always easy, though. Back in school, she remembers asking to go to a friend’s house only to be told she couldn’t.

“She said, ‘Kelly, no. My dad has a shotgun and he doesn’t like coloured people,” she says. “She told me the truth, and I have to take her truth, not debate it with her, but form a relationship with her. That’s what she faced at home, but that’s not what she wanted going forward, and oftentimes I find that with the labeling, shaming, blaming — how is somebody going to move forward? How are they going to have a different experience if I shut the door?

Another time, she remembers getting a cup of coffee at a board meeting and being asked if she was cleaning staff by another woman in attendance.

“Now the way that I feel racism and at that time, people would like to actually see me out of the room. And I'm not going out of the room. I want to sit at the table, and that means I had to be assertive. I had to be clear. And, you know, sometimes I just have to suck it up, because things do affect me, but if my goal is that I want to be at that table, I will try to make it work out.”

“Where I can affect change as a council member is raising my voice and saying, ‘Where’s the process in this? Where’s the policy that dictates transparency? Where’s the matrix? How are we advertising this? How are we engaging? How are we networking?” she asks. “I think meaningful policy will stay. I could be here today but not here tomorrow.”

“We need to do more work. We all recognize that, but at least we're getting somewhere.”

“I have been the token person many times because of my age. They would need that one person, and you wouldn't really be given the respect or the voice. You wouldn't be given the opportunity to express, and I don't believe in that. I don't think just because you're from a different culture that you're going to be a good representative, But at least we should have people from the culture to discern who is and who isn't. We aren't even there yet."

Marc Forcier is the vice president of Black Connections, a club at UFV that he helped start to foster a greater community for Black people in Abbotsford. Forcier is Haitian-Canadian, and growing up, he felt isolated and unrepresented in the valley. Black Connections keeps the Black community strong there, even though the organizers have long since graduated.

Forcier attended the March Against Systemic Silence demonstration in Abbotsford last summer and was “very surprised by the turnout of people.” He hopes that means people in the area are waking up to the realities of racism in their own communities. Black Connections has noticed more local groups asking to collaborate and consult with Black leaders, but Forcier says he has seen “no change at all” in terms of infrastructure.

“Here's what they'll say: ‘Vote. Run. This is Democracy. That's what you gotta do,’ but it's hard to run in a race that's already rigged, though I don't want to. I don't have the tools for it. Not to say I don't have the education for it. I can definitely learn, but at least when it's explained to me what it would take, it's like, ‘Oh, that's beyond my means’ — financially, team wise, time wise, and all that stuff.”

Eliminating those barriers and providing more support for people of colour to break into politics could be one solution, Forcier says.

“I would like to see changes at all levels in terms of representation. At the highest level here for us within city hall, I'd like to see that. We have a council that represents the people and what the makeup of Abbotsford is, or even the hopes of what they want Abbotsford to look like, especially as we're becoming this hub of development.”

Chahal says engagement with people of colour needs to be respectful before it can be meaningful. That’s true in Abbotsford too, where she hopes there will be more people of colour on council soon.

This series is by no means an exhaustive list of every incident that has contributed to that history. Instead, it is a reflection led by community experts in relevant areas of expertise, meant to be part of CIVL’s ongoing dedication to anti-racist coverage.