The Centre Wellington Fire Department may soon be getting a boost in funding from the Ontario government. The government is providing $5 million in funding to help municipal fire services address the impacts of the pandemic.

Centre Wellington deputy fire Chief Jonathan Karn said they haven’t been awarded any funds yet, their grant proposal is due today, he is confident they will get some funding.

“My honest opinion is they’re putting out the grants because of the closure of the [Ontario] Fire College, so, they’re doing everything they can right now to help out fire departments, especially with the training side of things,” Karn said.

The Ontario Fire College in Gravenhurst has been around since 1949, and the province announced in January that it will close by the end of April.

Karn said whatever amount of funding they receive it will be needed as they won’t be able to send their fire fighters to the fire college for training courses now.

He said that fire departments across Ontario will be able to submit proposals for a base funding amount of $4,500, plus additional funding will be awarded based on population served.

Karn said since most of Centre Wellington’s fire fighters are volunteers it is difficult to get them up to the fire college because the courses are run throughout the week, and most of them have regular jobs and lives outside the department. 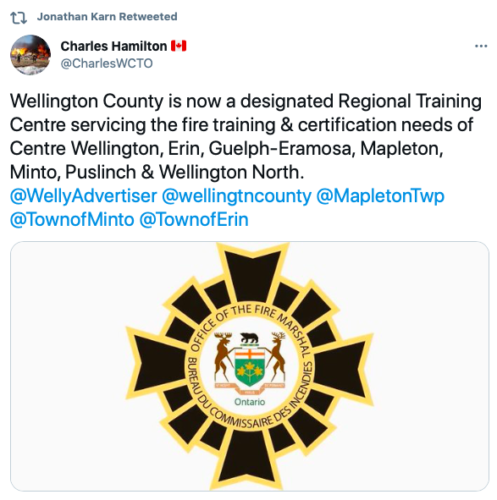 “It might be closer to home, they have the flexibility to run courses on weekends if that’s what they choose to do, so using that model is an extension of the fire college, it’s no different than a university or a community college having a satellite campus in another town,” Karn said.

He added it won’t be a bricks and mortar training facility, it’s going to be a combination of all the sites they currently use in Wellington County, in particular for their recruit training class.