This follows the commemoration of Empancipation Day on Aug. 1. The month commemorates the beginning of ending slavery across the British Empire in the United Kingdom, Canada and the Carribean in 1884.

A musical performance from the Kambi Ya Watoto youth camp concluded the ceremony. 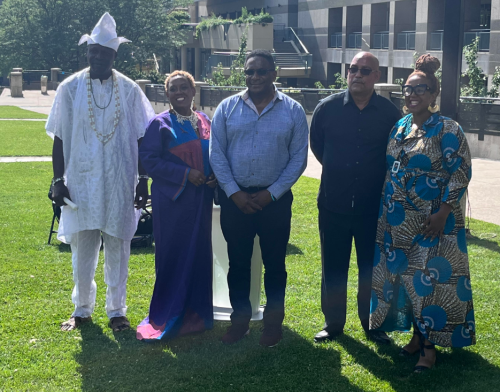 Professor Khenti emphasized the fight for freedom for Black slaves, especially as the process went beyond the abolishment of slavery by the British Empire

"Emancipation was not a gift for Black people," said Khenti. He said it was misconceived as given, rather than fought for in the 19th and 20 centuries.

CJRU had the opportunity to speak with deputy mayor Thompson, who reflected on the importance of Emancipation month and the need for continued action in the present.

"For me, it is really important in term of the recognition and the challenges that Blacks have experienced over the years, 400 years plus," said Thompson. "Today it still continues and so on, and I think it is so important to ensure that all of us recognize we have a role in the success and eradication of racism and discrimination right across the board."

Several events are slated for this month for the Emancipation month commemoration.

This will include more from the city, as well as from other community organizations like Blackhurst, who held an Emancipation day march across the downtown core on Aug. 1.