"A lot of my work comes from my own wandering and explorations of the city, [and] walking up the same alleyway everyday to get a cup of coffee, and try to look at that again, as the light changes, seasons change," said Harvey. "My work these days has also become increasingly about documentation as well as the old city is lost."

The works captures what he calls "the beauty in the ordinary, everyday objects and places" of these neighbourhoods.

"It's upsetting to see the historic parts of the city lost to development, and these little bits and pieces disappear are things that are sometimes overlooked, and you don't notice them there until they're gone," he said. 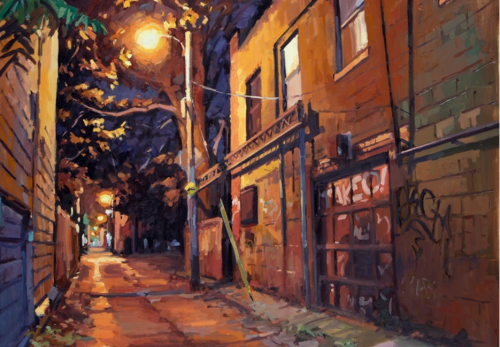 His paintings will be on display for the DRIFT exhibit in Toronto's historic 401 Richmond St. building. The name DRIFT refers to Harvey's own journey and exploration throughout the city streets.

He hopes his works will "reignite" the sense of exploration around the areas, and see a sense of beauty in mundane structures like dilapadated buildings.

The DRIFT Exhibit runs this month until Oct. 30 at Abbozzo Gallery at 401 Richmond St.