After 24 minutes of debate, the SRD passed Rainbow Ridge’s application to have a six acre portion of land, on Cortes Island, rezoned to facilitate the development of up to 22 seniors’ and affordable housing units.

The issue was almost deferred

At one point it looked like the whole issue could be put on hold until an accidentally omitted January 10th letter from Island Health was made available to every director. The resulting vote was split along very familiar lines, to anyone who has been observing the Strathcona Regional District (SRD) Board in action. The motion to defer the issue was evenly split, 6 to 6, which means it did not pass.

There were moments of magnanimity. Cortes Island’s Alternate Director, Corry Dow, said that if it would put the minds of her fellow rural directors at ease, the matter should be deferred until the missing letter was available. Regional Director Jim Abram‘s response was to suggest staff simply read the letter out loud.

After this was done, Regional Director Brenda Leigh (from Area D, on Vancouver Island) revealed that her opposition stemmed from additional concerns.

“This proposal is for 25 units on 6 acres and unless there is a lot of money put into high end sewage systems and, you know, Cortes will be looking for grants and monies to do that probably. I do not think it is wise to put that kind of density in an area that has no water, no sewer, and Hague Lake – which is their main source of drinking water – right down hill, about a quarter mile from this location. I do not think this is a wise move and it is going to lead to a lot more people asking for more money, more money to make this work,” she said.

Fact Check: The application is to rezone +6 acres of a 51.3 acre property for the development of 20 units, plus 2 flex studio units. 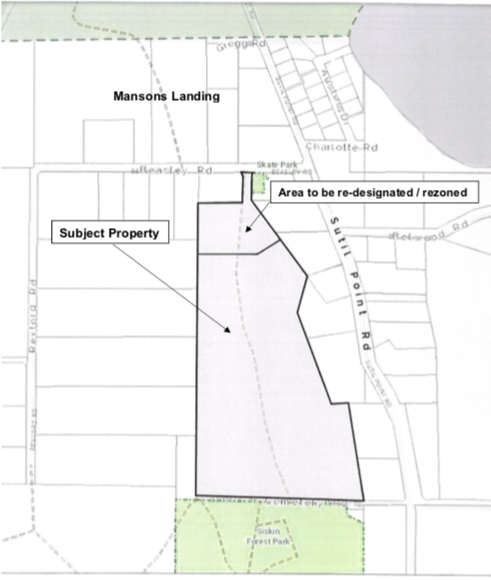 Map showing the +6 acres being rezoned, which is at the north end of a much larger parcel. The entire property is owned by the Cortes Island Senior Society - taken from SRD rezoning application

“That was a major concern of many residents in Mansons Landing, when the project was first proposed," replied Alternate Director Dow. "The engineers and wastewater specialists they have dealt with have reassured people that they can deal with it. They have a whole team working on grant applications and philanthropic donations in order to make this happen because the Cortes Community so passionately believes in having a little bit more affordable housing on the island. I appreciate the concern for the water quality, but due diligence has been done and the applicant has replied to this more than one time as we have looked at this over the past few months."

All of the Cortes residents that attended the public hearing for this project, either in person or virtually, spoke in favour of it.

The SRD received more than 100 letters regarding Rainbow Ridge and, according to Dow, all but two expressed support.

When the issue was finally voted on, it passed with a single voice (Director Leigh) raised in opposition.