About a hundred people attended the memorial for Jared Lowndes, the 38-year-old Indigenous man who was killed by the RCMP outside the Campbell River Tim Hortons takeout on July 8.

The public portion of the memorial began in downtown Campbell River at 11:30 a.m. on July 20.

From there, participants drove to the RCMP station, where the crowd voiced their anger outside the door.

Lowndes mother, Laura Hamilton, and more than a dozen protesters went inside, where three officers met them. You could see the officers mouths' moving, but their words were drowned by the roar that erupted in response. 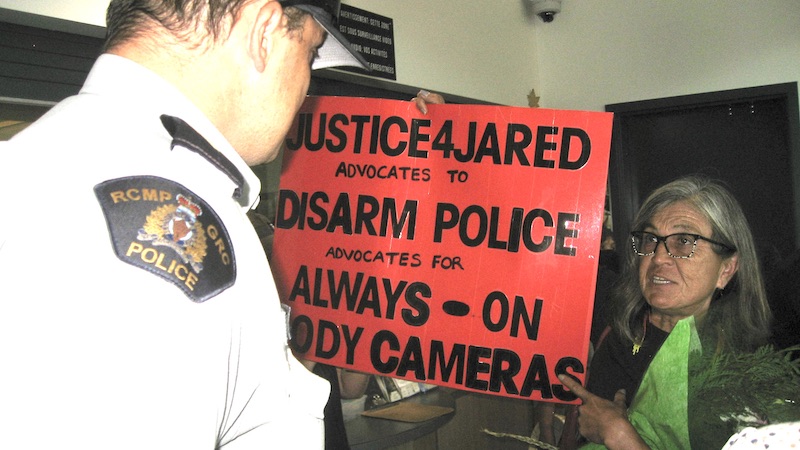 Jared Lowndes’ mother, Laura Hamilton, speaking to one of the three officers who met her inside the RCMP headquarters. Photo by Roy L Hales.

Chief Darren Blaney, of the Homalco Nation, blames the shooting on the RCMP’s lack of training. He said the police should not have the authority to use lethal force after only six months training. The First Nations community, and people of colour, are paying the price, he added.

The RCMP were attempting to serve an outstanding warrant for weapons possessions.

According to Fay Blaney, the great aunt of Lowndes daughters Phoenix and Patience, Lowndes was acquitted of the associated charges years ago. The court dismissed them after Lowndes common-law wife confessed she had planted the gun in his possessions.

But the warrant, to obtain a sample of DNA that could show if Lowndes touched the gun, was still in the system.

Blaney said the First Nations community has been targeted by police. She suspects that Lowndes fled because he knew the RCMP could inflict violence upon him with impunity.

According to a memo sent to Public Safety Minister Ralph Goodale in 2017, 36 per cent of the people fatally shot during the previous decade were Indigenous, but they constitute less than 5 per cent of the population.

Lowndes is the fourth member of Vancouver Island’s First Nation community that police have killed in a little over a year. 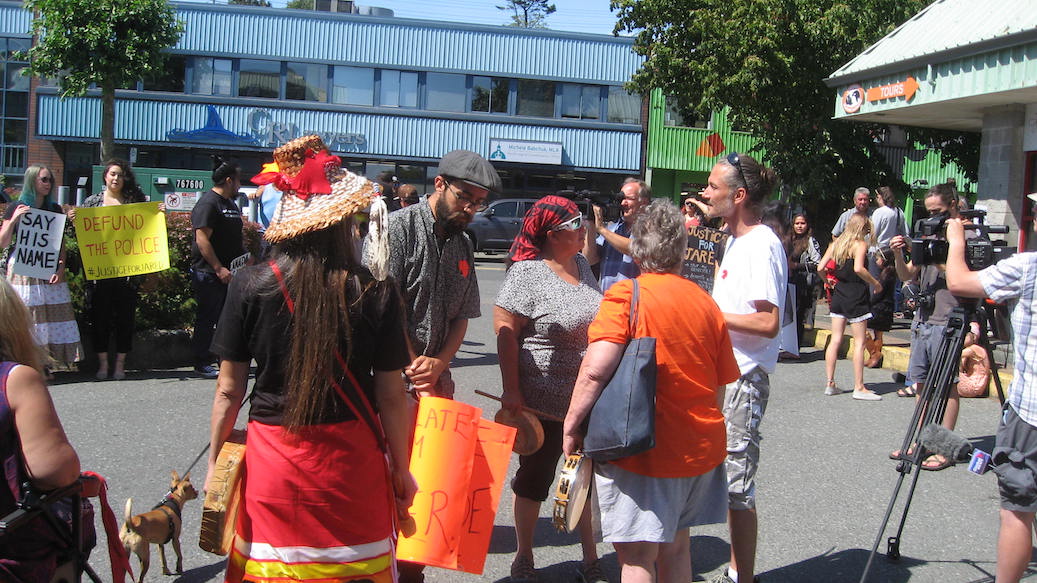 The procession assembling in downtown Campbell River for the memorial for Jared Lowndes. Photo by Roy L Hales.

When they caught up with him at the Tim Horton’s take-out, the RCMP rammed Lowndes' car from three directions. Lowndes and his four month puppy were trapped inside. The RCMP sent the police dog Gator in after them and Lowndes defended himself with a knife. The RCMP responded by shooting him in the face three times.

Cortes Island resident Tanya Henck drove by the scene at 9:15 a.m. that morning.

“I drove by probably 15-20 minutes after it happened and there was a good dozen cop cars lined all along the front. You could see people in the adjacent parking lot looking over. I drove by, probably an hour and a half later and you could see Jared’s body. He was covered, but it was very obvious to see. There was an ambulance on either side of him, but nothing was blocking him [from view]. When my friend drove by at 6:30 that evening, you could still see his body laying there,” she said.

Blaney was among the friends and family that gathered on the sidewalk outside Tim Hortons. She said Lowndes body was not removed until 10 p.m. that evening.

The street side memorial for Lowndes, set up within in view of the Tim Horton’s take-out where he was gunned down, has been torn down several times and replaced by a memorial to the dog Gator.

Before the procession left the RCMP station, Lowndes' mother laid flowers at another memorial set up for Gator.

“We didn’t come to year it down or shred anything. We have more respect than that," she said. My son has more honour than that and he wouldn’t allow us to do anything like that. He would have wanted us to bring flowers and pay our respects, not harm anyone or anything. My son was an animal lover. There was no way he would want to kill a dog. It had to be life and death for him and his own dog, He was a vegetarian. He as 6 foot 6 and a vegetarian,” she said.

The testimonies to Lowndes character — his willingness to help, to listen, to drive people when they needed a lift — were many. A friend who had known Lowndes for 25 years spoke of the many times they had shared each other’s problems. Others, including Lowndes daughters, shared their grief through song.

Grand Chief Stewart Phillip, of the Union of British Columbia Indian Chiefs, could not attend, but wrote,“we mourn the loss of another cherished and critical Indigenous life that was needlessly taken at the all too ready hands of police."

"Jared Lowndes endured unchecked racism, violence, sexual and physical abuse, and mistreatment from the foster and criminal justice systems throughout his life," he added. "We join Jared’s family in absolutely condemning the lethal force used by the police and we support their calls for an Indigenous investigator and civilian monitor to be appointed by the Independent Investigations Office (IIO), as well as a public inquest into an incident that is but the latest in an unacceptable and racist series of Indigenous people dying through police actions.”