“If we can go out and clean up – helping another set of communities like the Heiltsuk, Kitasoo/Xai’Xais and Gitga’at – we can certainly start cleaning up our community. That’s what I’d really like to see coming out of this,” said Jonas Fineman.

He was one of nine eco-tour captains who had just returned from a beach clean up along BC’s central coast. 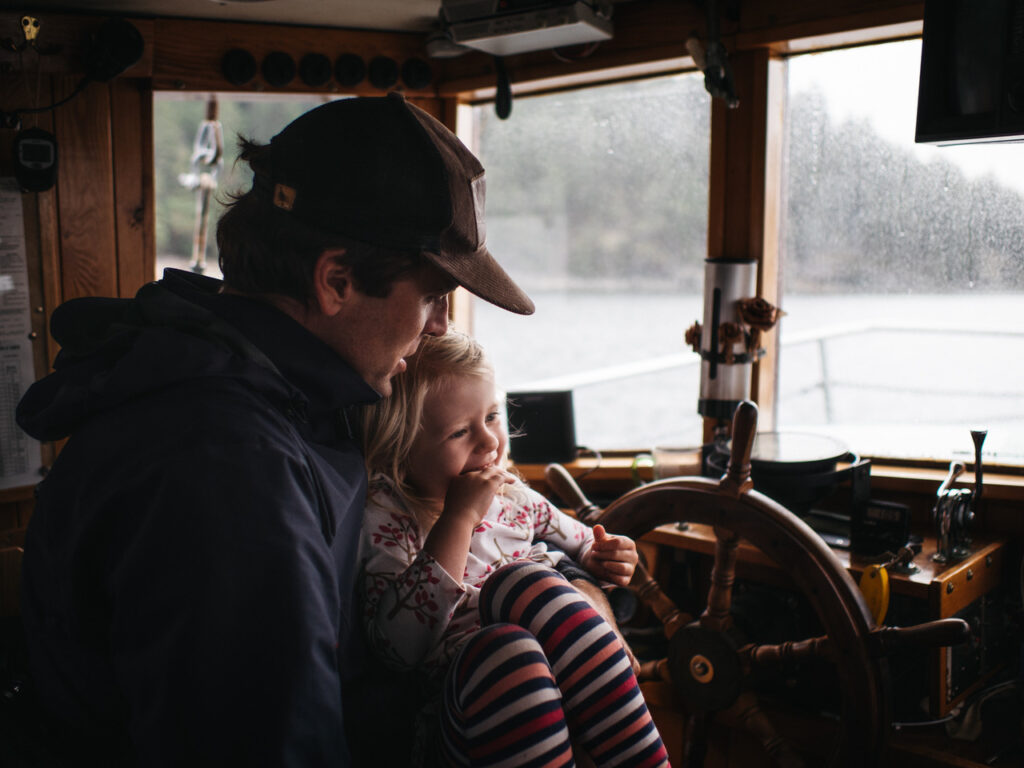 Jonas Fineman and his daughter MIla at home on board the Misty Isles. Photo by Louis Bockner.

Jonas was hired to serve as captain of the 70’ foot ketch “Island Odyssey”, but his name is associated with another vessel here on Cortes Island.

He and his wife, Amy Bockner purchased the “Misty Isles” last year, but he was captain of another vessel most of that summer. They decided to officially launch their new venture in the Spring of 2020.

No one anticipated COVID-19.

“We were able to function for two and a half months for what is normally a four and a half month season. … We had some really beautiful times out on the water, with BC residents,” said Fineman.

The “Misty Isles” wasn’t the only boat affected by COVID-19.

Randy Burke, Fineman’s employer for close to nine years, is in a select association of eco-captains that take visitors to remote destinations between Northern Vancouver Island and Haida Gwaii.

“That group of operators had no season this year. It was primarily based on the request of local First Nations to not have visitors from outside their communities showing up on their docks,” said Fineman.

A BC Government press release quotes Kevin Smith, president of Victoria based Maple Leaf Adventures, “When it became clear that we all would have to cancel a sold-out season, we asked ourselves how we could use our skills to protect the environment that sustains us.”

Scope of the beach clean-up expedition

There were two components to the project.

Between 75 and 100 First Nations personal from Klemtu, Bella Bella and Hartley Bay cleaned up shorelines close to their villages.

The crews of nine eco-tourism vessels focused on 1,000 kilometres  of shoreline “around 100 small islands.”

They were assisted by a helicopter, and a barge from the Heiltsuk community in Bella Bella.

“First boots on the ground were in mid August and our last day at work was September 26th,” says Fineman.

“It was 45 days of hard work and a lot of complexities. Not just from the industrial side of it, boats and helicopters, but also the weather and tides.”

They bagged 127 tons of debris.

The typical day for a captain started with checking the Environment Canada weather report at 4 a.m.

After that, Fineman described his principal duties as: deciding who went to which beach; coordinating logistics for the crew, barge and helicopter; ensuring that none his crew were not hurt; and “the really important one is making sure that everyone is fed and rested.”

“None of it would have been a success if we had had a lot of injuries or people had been grumpy because they didn’t get enough to eat," he added.

Though none of the boats brought the five star chefs they would normally have during tourist season, “one of the parts of being a good guide is having cooking in your skill set.”

In the podcast above, you will hear Fineman describe ‘cook-outs’ and “food trading.”

The larger vessels served as motherships and zodiacs transported crews to the shore.

“The crews on the shore were out for the duration of the day. If it was a particularly busy day, it would start early, work one shoreline and then reconvene back on the mothership and reposition to to do another Islet.”

“We would have to weigh everything to make sure the final parcel was not too heavy for the helicopter,” says Fineman.

Some of those bags would have to wait above the high tide line for up to a couple of weeks before the helicopter and barge could get close enough to ‘harvest’ them.

One of Fineman’s most memorable evenings took place towards late  September, when they were working down by McInnes Island.

“We had worked a full day with beautiful weather. We had covered a lot of shoreline. I think we had probably up to 100 lift bags leave the beach and go out to the barge … There were 4-5 boats at the southern end of the island,” he said.

“It got dark. The helicopter landed on the barge for the night and we all decided we were going to keep working. So headlights went on. It was a beautifully warm, totally still night. The seascape really facilitated this, but I think we ended up reparceling up to twenty of these large lift bags. These can be up to the size of a Volkswagen bug, but we rolled them into our  little zodiacs – in the dark – and then took them over to … the ‘Cascadia.’ It is a 125 plus foot power catamaran, like a little cruise ship. They have a really big deck crane on the back deck.”

“The owner and operator, Kevin Smith, said ‘Alright, if you guys are going to work into the dark, we’re going to hang out here by the lighthouse. You just bring the garbage to us.”

“So suddenly it’s 10 at night, the moon’s coming up and this little fleet of rubber boats with giant bags of garbage, and headlamps on, is coming alongside this massive luxury yacht. This is not something you normally see in a season. The back deck of the Cascadia was covered with lift bags, which the helicopter picked up the next day.”

“ … I think a lot of people are going to remember that night, garbage picking at McInnes Island.”

“There is always something to do on a boat,”said Fineman. “you are always looking to the next day, you’re looking at the weather … you’re assessing the crew. Are they getting enough to eat? Are they happy?”

End of the season

The weather was turning and they had 18 hours to sail 130 miles, when the expedition finally ended.

“We moved down to Calvert Island and made it across Queen Charlotte Sound in about 14 hours. By the time we got into Port McNeill, the weather was really nice. The next morning it was horrible. So we snuck through.”

The barge was delayed for three days, until the weather cleared, then crossed to Port Hardy.

The bulk of the garbage was taken to a landfill.

“Our dependence on plastics and all of its relatives – you know the polystyrene, the water bottles – that is something that needs to change because there is not a comprehensive response to recycling all of that stuff,” said Fineman.

He and his colleagues felt a need to spread the word about what they accomplished.

“We knew from the outset that branding had to be a big part of this, in order to spread the word. Otherwise it would be a barely visible effort out in the bush, by people who mostly live in the bush.”

If a campaign like this can be carried out in remote islands, why not more settled areas?

“I have been inspired to start promoting things around Cortes and the Discovery Islands, with the Misty Isles. I know there is going to be no shortage of interest.”