Ryerson University announced on Aug.26 that the school name will be changed.

The school’s board of governors accepted 22 recommendations from the Standing Strong Task Force that were outlined in a new report.

The task force was created in September 2020 to discuss the legacy of Egerton Ryerson, the school’s namesake, and to seek reconciliation with Indigenous communities.

The report writes that with Ryerson’s namesake being increasingly "recognized as a symbol of colonialism, the school’s identity cannot be disentangled from separate schools, segregation, the genocide of Indigenous Peoples and cultural erasure."

Further, the report writes that the name Ryerson does not reflect "the values that define the school, and therefore a university rename is recommended through a process that engages with community members and stakeholders."

In a statement from task force co-chairs Catherine Ellis and Joanne Dallaire released that same day, it writes:

“To reach our recommendations, we sought guidance and knowledge. We learned from and worked with scholars, Elders, historians, Traditional Knowledge Keepers, archivists and various subject-matter experts. We heard from over 11,000 students, faculty, staff, alumni and others about both Egerton Ryerson’s legacy and how they felt commemoration should be guided at the university. Our recommendations reflect the kind of ancestors that we wish to become.

They embody our university’s commitment to being un-apologetically bold, intentionally diverse and inclusive, dedicated to excellence, respectfully collaborative and a champion of sustainability. While much work remains to be done, we are confident and excited about the future of the university and the strength of our community.

Our hope is that everyone who reads our report finds joy in learning, sees themselves represented and joins us in optimism for our university’s next chapter.”

Changing the name of Ryerson University, as well as removing the legacy of Egerton Ryerson traces back to 2018, when more details emerged of his involvement in the creation of Canada’s Residential School system. 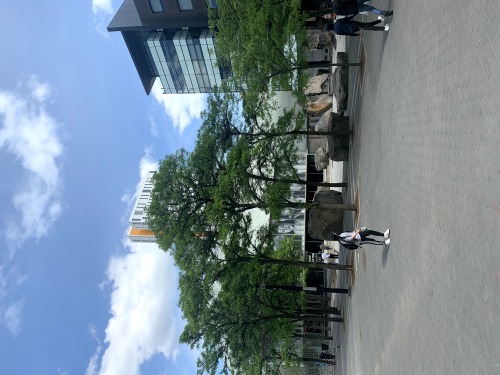 Ryerson University is expected to change its name after accepting recommendations from a task force committed to reconciliation with Indigenous communities. Photo courtesy of Daniel Centeno/CJRU.

That year, after extensive consultations, the university released the Truth and Reconciliation at Ryerson: Building a Foundation for Generations to Come report.

A plaque acknowledging and outlining Egerton Ryerson’s involvement in the development of Residential schools was unveiled beside his statue.

The current report writes that these 2018 steps were significant initially, but calls for the statue’s removal and the school’s name change intensified this summer when the remains of 215 Indigenous children were found in unmarked graves near a former Kamloops, B.C residential school in May.

Since the discovery, the statue of Egerton Ryerson was removed following a period of protests on June 6.

In a statement from the school’s president and vice-chair Mohamed Lachemi, he writes that the university will honour the report’s recommendation to develop an action plan by Jan. 31, 2022 that will address and implement the Task Force’s 22 recommendations, which will be referred to the Senate prior to implementation.

This will be the fourth name change since the school’s inception in 1948.

However, this will be the first time the school will not have “Ryerson” in its official name.