Revelstoke mayor and councillors' first regular council meeting is this week, the start of the all-white, all-male council's four-years of public governance after the B.C. municipal election in October. Community leaders acknowledge the work these elected officials will have to do to include diverse perspectives in their decision-making.

Women will also have to work hard to have a voice in council decisions, say Lynn Loeppky, the executive director of the Revelstoke Women's Shelter Society, especially as Revelstoke is going through housing and food security crises and growing into a resort community, she says.

"I think it's really important to have those women's perspectives and issues come to the table."

It doesn't really matter who the mayor and councillors are, Loeppky says, as long as women are included in the discussions.

"We're doing our homework, we're asking the right questions, we're bringing things to meetings and we have some input in council and in the mayor's office."

There are many women in Revelstoke who hold positions in the social sector like herself, Loeppky says, who are happy with their seat at the table without being involved in politics, "or the political problems that go with it."

Nicole Cherlet was a councillor for four years and was running for mayor, but lost to incumbent Gary Sulz.

"I think they have a big task on their shoulders to make sure all voices are being heard," she said of the mayor and council.

She hopes when they're making decisions they're mindful of the implicit biases every person has.

The current mayor knows they have their work cut out for them and he says the incoming council will be "engaging with those in the community in the female gender."

Sulz says he knows from experience from listening to his wife that when you ask for an opinion you have to be prepared for it to be different than your own, but that it's required in this case to accurately represent the public.

Equal Voice is a national, multi-partisan organization that works to get more women elected into all levels of the political process, and Allie Blades is the chair of the B.C. chapter in Vancouver. She says the visual representation of young girls not seeing women in public leadership positions matters.

"It's then not completely representative of the community's values and ideas when it's just one gender, really," Blades said.

The latest census data from Statistics Canada collected in 2021 shows Revelstoke's population at 8,275. 4,230 are men-plus and 4,045 are female-plus. Statistics Canada notes "gender" means a person's identity as man, woman or non-binary and this data is collected, but it's aggregated and presented as men and women-plus because because the non-binary population is small, it says, and it's sometimes necessary to protect the confidentiality of the responses provided.

The mayor and council can start working now to identify women who may want to run for office in four years, Blades says.

"Any elected representative has a responsibility to make sure they're involving the community in the process," she said.

Revelstoke's first mayor and council was sworn into office in 1899. Councillors were called "aldermen," and they often had big mustaches, but other than that it looks pretty much the same as our council today: all white and male. Cathy English, the curator of the Revelstoke Museum and Archives, says when school children see the photo they notice the outfits and mustaches first, then comment on the lack of diversity. 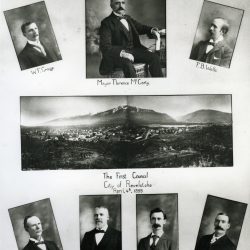 Revelstoke’s first mayor and aldermen in 1899. Photo courtesy of the Revelstoke Museum and Archives. 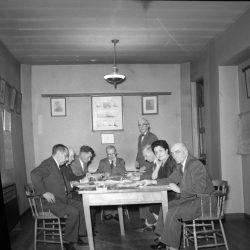 Revelstoke’s city council with first female councillor in 1957. Photo courtesy of the Revelstoke Museum and Archives.

The first female, Lilian Waby, was elected to council in 1957 with the highest percentage of votes.

English wasn't available for an interview but she did note that people can only vote for who's running. In Revelstoke's past municipal election, there was only one woman running for council and one for mayor, and they both got the lowest number of votes.

"People either want to run or not want to run," Sulz said, "And it's concerning from the perspective of an old white guy ... I look at it and go, how do we get others involved?"

There is a "crisis in candidacy" across Canada according to David Black, a political scientist at Royal Roads University in Victoria.

He notes that in the municipal elections in Ontario, also in October, 20 per cent of the available positions were incumbents because people weren't stepping up to run.

He also said that data collected in 2018 by the Federation of Canadian Municipalities shows nationwide that 18 per cent of mayors and 28 per cent of councillors were female.

There are several things that prevent people in general from running for council. Poor pay, which Black says is especially true at the councillor level.

"A barista could probably earn more, if they hustled, than your average councillor," he said.

The high workload is another deterrent.

Shelby Harvey was Revelstoke's first female mayor, elected for a three-year term in 1995. At the time, she owned several businesses with her husband, and they were raising a family. She said she wouldn't run for mayor again in those circumstances.

"There was three nights I didn’t even go to bed I had to stay up and pay bills and pay my men before I had to go out of town for some meetings," Harvey said.

"If you're doing your job, it is a time commitment," she said.

Revelstoke's current mayor said he thought long and hard before running for a second term, because of the toll it took on his family, and not just the time commitment.

The increased exposure to the public via social media is another major deterrent from people running in politics. Sulz says he's had everything from death threats to having his name maligned.

But Harvey says back in the late 1990s, before social media, it was the same for her.

"Yup there was some not nice things, but you know what you just gotta move on," she said.

That's because women tend to earn less than men so can't afford to take on a low-paying role, and also play the role of caregiver for their families. One way to get more women to run is to increase the pay of the role, which Black says is always contentious for taxpayers.

But if the pay is low: "That means you get people who are either retired, or independently affluent ... serving in municipal office," he said.

In the B.C. Community Charter, which governs how municipalities are run, it says, "The purpose of remuneration of an elected official is meant to offer a reasonable replacement for some if not all, of the income that might be lost due to serving in office."

Black says the role of elected officials is traditionally seen as a public service, but it should be seen as a job as a way to get people in who represent the demographic of their community.

The last Revelstoke city council approved a Remuneration Report that recommended a pay raise for the current council to be voted in at the inaugural meeting, on Tuesday, Nov. 15.

The mayor formally got $36,000 per year as a baseline remuneration, and councillors got $16,000. That's being increased to $48,000 for the mayor and $24,000 for councillors, with a CPI-calculated increase each year based on the prior year.

Another aspect to the crisis in candidacy in municipalities across Canada, is that along with people not running for office, people aren't voting.

"The turnout story, in 2022, in B.C. for civic elections, is horrifying," Black said. "Absolutely terrifying."

In Revelstoke the voter turnout was 30 per cent, and the provincial average was 29.2 per cent.

Harvey was disappointed in that, saying it's our responsibility to be engaged.

People told her they weren't going to vote because they didn't feel their vote would count.

"Well if everybody thought that way we wouldn't have what we have now," she said.

Lynn Loeppky says women also need to step forward and put their names in. "I think we just have to be a little bit more assertive," she said.

The next four years can be an opportunity for the city to increase communication and engagement, says Cherlet.

She encourages anyone who's ever been told they're a leader, to think about running.

"If you've been told you're bossy, or to sit in the corner," Cherlet says to reach out to herself or another female leader in the community to find a way to get involved.