The Columbia Shuswap Regional District's (CSRD) new compost facility behind its landfill on Westside Road in Revelstoke will be ready to receive compost Nov. 1.

There will be a bin available for residents and businesses to dump compost at $120 per tonne, with a minimum $10 charge.

Eventually, the hauling company Waste Management will provide restaurants, apartment buildings, schools, offices and daycares with commercial-sized compost bins. The company will charge organizations a pick-up fee, which will be on top of the CSRD's dumping fee $120 per tonne.

The company is about six to eight weeks away from having the bins ready, said Graham Casselman, waste reduction coordinator for the CSRD, in an email.

StokeFM reached out to Waste Management and will update the story if they get back with more information. 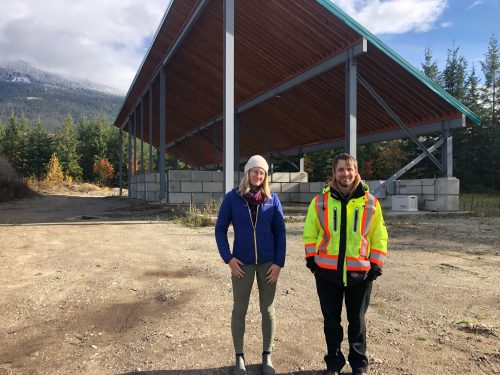 Meanwhile, Isabel Kessi is the compost education coordinator with the Local Food Initiative. As her title suggests, she educates people, businesses and organization about getting ready to separate compost from other waste.

"Especially restaurants, they're going to have to change the way they handle their waste," Kessi said.

She'll help with finding counter space, training staff and making signs. She will help with schools and apartment buildings as well, she said.

The idea with providing a separate compost facility is to keep it out of the landfill. Casselman said in an interview when compost is mixed with other waste it produces more methane gas, which increases the greenhouse gas emissions of the landfill. Furthermore, separating it out helps extend the life of a landfill.

The compost facility is a huge, wall-less structure with a slanted tin roof and concrete floor. It has four bays, and perforated pipes in the floor to blow air through the compost to speed up decomposition.

By September, the plan is to start charging Waste Management more if compost is mixed into regular commercial waste—from $120 a tonne to $240.

As for when curbside compost pick up will be available to residents, Kessi said that's up the city of Revelstoke. StokeFM reached out to the city and did not hear back.

Click below for a report that aired on StokeFM Oct. 31: