Protesters turning up heat on government for public inquiry

Protesters gathered outside the office of Nova Scotia's Justice Minister Mark Furey in Bridgewater yesterday, (July 27) to demand he call a public inquiry into the shooting deaths of 22 people in April.

Families of the victims have called on the provincial and federal governments for an open and transparent hearing into the events of April 18 and 19. On that date, Gabriel Wortman committed multiple shootings and set fires at 16 locations in the Canadian province of Nova Scotia, killing 22 people and injuring three others before he was shot and killed by the Royal Canadian Mounted Police (RCMP) in Enfield.

That didn’t sit well with protest organizer Laurie Scott who says she put the event together to show support for the families.

“They deserve answers," Scott said. "They deserve an open public inquiry. A review is Mark Furey and Bill Blair paying their cronies an exorbitant amount of taxpayer’s money to tell them exactly what they want to hear. That is not what the families deserve and want.” 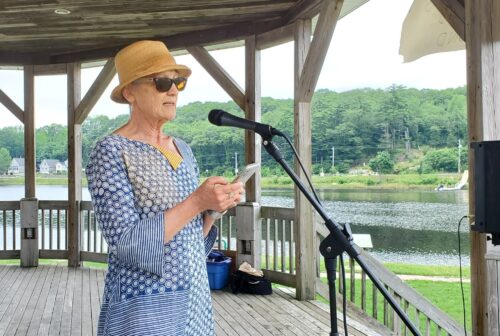 Family members, lawyers and politicians have spoken out publicly against the review process for being too secretive.

A public inquiry would have powers like a court of law to compel witnesses to testify under oath. All records and testimony would be available to the public, and anyone with a specific interest could apply for intervenor status and would be allowed to cross-examine witnesses.

The review panel has no power to force people to testify, there will be no intervenors, documents presented will remain confidential and the proceedings will only be made public if the panel decides to do so.

The review panel has also been told their work cannot impact any of the ongoing investigations in any way.

Tom Webber travelled with members of his family from their home in Wyse’s Corner near Dollar Lake to speak for his son Joey at the Bridgewater protest.

They want to know how the killer was able to make his way from Portapique to where the 36-year-old father of three was shot close to the family home.

“On Sunday, of course, it happened to my son," Webber said. "That’s the following day. So they’ve got a lot to explain there. He seemed to be just taking a Sunday drive, killing people on his way.” 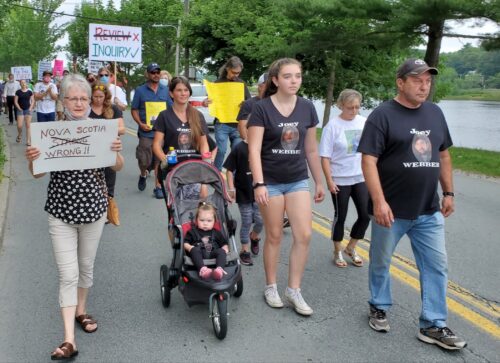 Furey was not in attendance and his King Street office was locked. Calls to his both his constituency and ministerial office asking why he was not present were not returned. Webber says he is not surprised the justice minister was a no-show.

“There’ll be a lot of questions put to him that he maybe, won’t want to face,” he said.

The protest drew a crowd of around a 100 people including the leaders of both opposition parties.

The NDP have called on the McNeil government to resume sitting in the legislature to debate the merits of the review versus a public inquiry.

Leader Gary Burrill didn’t mince words when asked how he felt about the review.

“In my judgement, if the government’s reasoning about this review panel were subjected to the scrutiny it requires, it would not stand up," he said. "It would wither before scrutiny because their arguments are contradictory and hypocritical and false.” 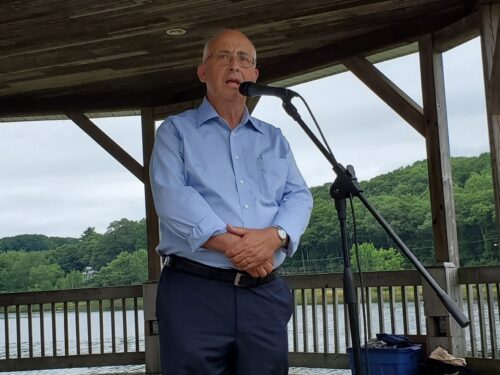 Both Burrill and PC leader Tim Houston agree, the provincial and federal governments need to change course and move from a review to a public inquiry. Houston promised to launch a public inquiry into the shootings if his party forms the next government of Nova Scotia.

“This is the worse mass murder, shooting situation in the history of the country," Houston said. "If this doesn’t require an inquiry I don’t know what the standard would be. It has to happen and certainly something I have promised the family members that I would push for and continue to push for.” 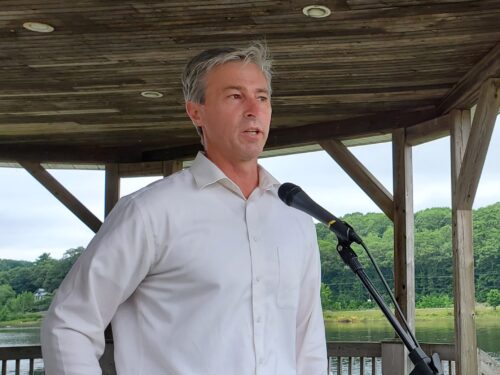 Protesters plan to keep up the pressure on government as another protest was held in Halifax Monday afternoon and an online petition launched Friday calling for a public inquiry already has close to 15,000 signatures.