Port Grocer up for sale

The owner of the Port Grocer hopes whoever buys the establishment understands they’re taking responsibility for the heart of the seaside community.

Owner Annabelle Singleton says what’s most important is that whoever takes this on recognizes its connection to the community.

“We have had incredible support from this community. There’s such an eclectic, diverse group of people here and everyone’s got something different to add or offer.”

Singleton began the business seven years ago with her two friends Deb Melanson and Sparrow Lyndsey.

Lyndsey returned to Ontario because of family obligations seven months after launching the business, leaving Singleton and Melanson to run the show with help from Singleton’s husband Robie Sagar.

For Singleton, running the Port Grocer to provide locally-sourced food aligned with some of her core values.

“If you have healthy, small communities, rural communities where people can work and get their food, it means a lot less travel. It’s a lot lighter living on the Earth.”

Singleton says they are looking for a buyer who will understand the Port Grocer is more than just a business.

“There are elders here in the community who, basically, some days, the Port Grocer staff would be the only people they might communicate with. That sort of stuff is really important to us.”

Singleton says they’re selling after some family health issues and the pandemic have given them pause to reflect on what they want to be doing over the next few years.

“It comes down to a quality of life decision. As much as we love getting up early and staying late at the Port Grocer and being on call seven days a week, you know, there are other things that we want to do," said Singleton. 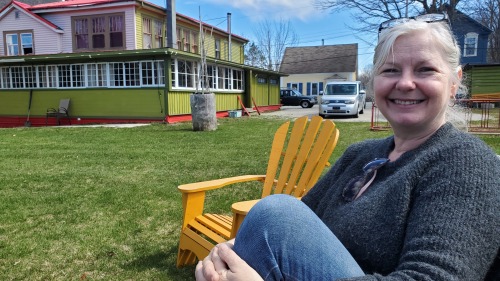 Annabelle Singleton relaxing behind the soon to be for sale, Port Grocer. Photo by Ed Halverson.

Singleton says she and husband, Sagar will remain living in Port Medway. Singleton will continue working her day job as an environmental regulatory consultant and the two have plans to move their tiny home from behind the Port Grocer to their home and establish a small retreat.

The final preparations are being made with their real estate agent and Singelton expects the Port Grocer will hit the market in the next few weeks.

She’s grateful to everyone who has worked, volunteered or even just come in to eat over the years to help make the Port Grocer what it is.

“It’s been such an honour to be part of this and to get to know both the very local, and the summer residents and the people who are touring Nova Scotia and who found us by accident. People are blown away when they come to Port Medway. There’s something in the water here, I think. It’s magical.”