Nova Scotia welcoming Canada to come on in

Nova Scotia is opening to the rest of Canada beginning Wednesday as the province enters phase three of its reopening plan.

For people coming from the Atlantic provinces that means no more self-isolation requirements.

Those arriving from elsewhere in Canada will need to complete a Nova Scotia Safe Check-in form and electronically upload their proof of vaccination.

The province is throwing open the border as public health continues to report new daily cases in the single digits.

Nova Scotia has 51 active cases of COVID-19, two of those are currently in hospital.

A major milestone in vaccinations was reached Tuesday as the province marks 900,000 doses injected into arms. 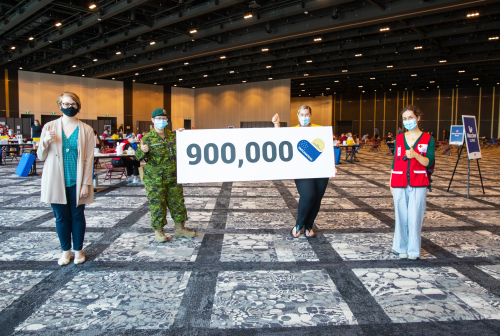 Tuesday saw a daily record of 31,000 shots administered and Nova Scotians are booked to receive 135,000 shots over the coming week.

Dr. Robert Strang says the vaccination rates are some of the highest in the country with 73 percent of the population having received at least one dose of vaccine.

But he is concerned young people in their twenties seem to be resisting getting their shots.

“In that age group many people think they’re invincible, they’re young, they’re not going to get seriously ill. Well even if you’re not worried about yourself, we’re asking you to do, like everything else through COVID, do it for other people around you. Do it for the rest of Nova Scotia,” said Strang. “And quite frankly, for young people, if they want to continue to have restaurants open, if they want to travel, well the way they get to do that is by making sure they’re contributing to the highest possible coverage rate.”

Strang says the province is on track to meet a target of two doses in 75 percent of Nova Scotians by the end of August.

Moving to Phase three of the reopening plan allows a household to host an additional 10 guests inside and 25 outside.

Restaurants and bars can now serve until midnight and close by 1:00am.

Sports, recreation, arts and music events will all see increases in capacity.

Dr. Strang also took a moment to recognize students, teachers and schools for the efforts they made during a difficult year.

“[Wednesday] is the last official day of school and I just want to personally thank, it’s been a difficult year for school but we’ve done well in Nova Scotia compared to many other places. We’ve had most of the school year in school. So I just want to personally thank students, staff, teachers for all they’ve done to get through the school year by keeping each other safe,” said Strang. “Have a good summer and we’ll come back next year with a much more normal school year. Thank you.”