A gathering of friends and selected media were on hand to watch a master Mi’kmaq canoe builder launch his biggest vessel to date.

Todd Labrador spent the summer at Kejimkujik National Park crafting a 21 and a half foot long birch bark canoe along with his daughter Melissa, her husband Corbin Hart and grandchildren Nakuset and Tepkunaset.

You can hear Labrador's granddaughter Nakuset Labrador sing ahead of the canoe launch:

Labrador said the high-sided canoe is three feet wide, and even at 21 feet long, doesn’t come close to those his ancestors built, some of which reached up to 30 feet in length.

“You know they would’ve paddled across the Bay of Fundy, along the Atlantic coast to Prince Edward Island and to Newfoundland in birch bark canoes,” said Labrador.

The canoe has no seats but is built to fit five adults sitting or kneeling low, which helps to keep it stable.

“If you put lots of weight in a canoe it also makes it very stable,” said Labrador. “So this canoe, you know, I always say it will take the mother, the father, the grandparents, the children and a moose.”

It’s that ability to transport a large number of people and supplies along the region's many waterways that made the birch bark canoe the equivalent of the modern day station wagon. 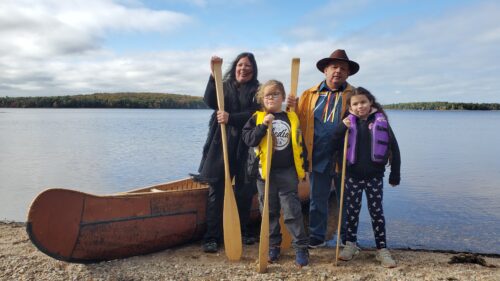 Building a canoe of this size was a learning experience for Labrador.

While he still used traditional materials such as birch bark, spruce root and cedar, most of which are sourced locally, he needed to learn how to apply heat in just the right way to make the thicker bark bend the way he needed.

Before he took up the craft, Labrador said it was over a hundred years since the last birch bark canoe was made in Kejimkujik.

He has built a dozen canoes ranging in size from two feet up to seven feet. Many of those are in museums or on display on First Nations. He is not sure yet where this canoe will make its home.

“We always say in the end the canoe will end up where it’s meant to be. But I’m going to paddle this canoe as often as I can and eventually it may end up in a museum or a First Nations community,” said Labrador. “That would be really nice if it did, where more people can enjoy it and see what their ancestors did. Maybe bring some good energy into the community that it goes into.”

He has a close connection to Kejimkujik national park having grown up about 20 minutes away on the Wildcat First Nation. 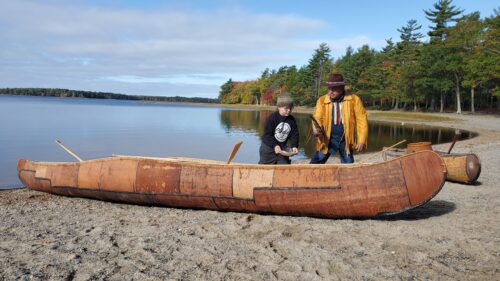 “It’s very special. It’s always a very powerful, spiritual feeling when you paddle a birch bark canoe. But to paddle it here where my ancestors were, actually my family for generations going back, they lived here. They would’ve been on the same beach that we’re standing on today. It’s very, very powerful and special,” said Labrador.

He is pleased to be able to share the experience of building canoes with his family so they can continue to carry on the tradition.