Pearl, Halifax Oyster Festival’s mascot is a giant oyster with long legs, over a dozen eyes, and red lips that has gone viral on social media, gaining attention from the New York Times, Buzzfeed and other platforms. 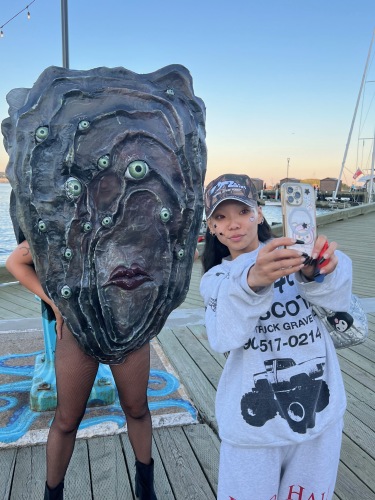 The mascot Pearl has received different feedback online, some describing it as a beautiful artwork while some find it eerie. Photo credits: The Coast.

Christine Oreskovich, publisher of Halifax's newspaper The Coast, and the person behind the mask of Pearl, said she and her team didn’t anticipate the amount of feedback and attention the mascot would bring.

The Coast has been doing events for the Halifax Oyster Festival for the last six years, they have also been involved with producing the Halifax Burger Bash for the past decade.

“When we started the festival, the group in the office at the time, we wanted a piece of art that kind of was interesting, and beautiful. We wanted some sort of focal piece or interesting kind of Instagram-mable art that represented the festival.”

Oreskovich said her team drew inspiration from other festivals and a team member and illustrator from her office, Aziza Asat, drew Pearl after a few hours, inspired by 1940s cigarette girls.

“She came back in what my memory serves was about two hours later and said, ‘like this?’ All of us at the time thought it is amazing. We couldn't have described such an amazing character that she drew.”

A year later, Oreskovich reached out to local artist Helah Cooper to see if she could make a costume out of the drawing and that was the genesis of Pearl and Earl, the male version of the mascot Pearl, that has a large mustache and a different eye colour. 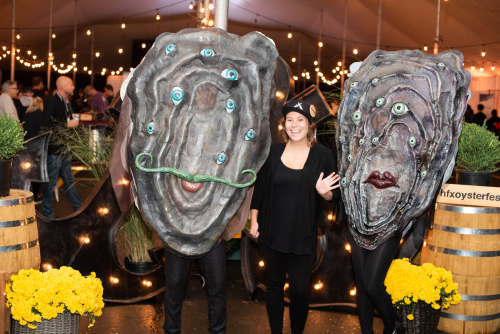 In 2018, Oreskovich reached out to local artist Helah Cooper to see if she could make a costume out of the drawing and that was the genesis of Pearl and Earl. Photo credit: Halifax Oyster Festival.

“She made us an incredible paper-mâché costume and wire for pearls eyelashes. It was incredible. A year later, she made us another costume of Pearl’s friend named Earl. Earl obviously isn’t getting the same fanfare as Pearl but they like to come out to the festival and dance around and get their photos taken.”

Oreskovich is a fan of oysters herself, saying they’re full of nutrients and vitamins and that oysters taste different depending on where they’re from.

Oreskovich said the photo that went viral was from a couple of years ago at the festival.

“A woman called Amy, she tweeted it on a Sunday night and that photo has been used before. It's a great photo and it looks fun, but kind of weird, like what's happening there. People are laughing but it looks moody, you know, the photo looks moody itself. And honestly, it's been a viral sensation.” 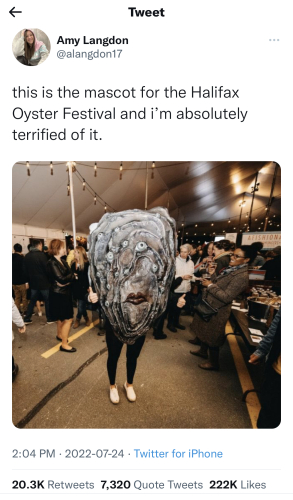 This is the photo of Pearl that went viral over Twitter shared by Amy Langdon that sparked nationwide attention. Photo credit: Twitter.

The mascot Pearl has received different feedback online, some describing it as a beautiful artwork while some find it eerie.

Oreskovich and her team have sold many shirts and towels with Pearl’s image on it, and over the weekend a tattoo artist will be doing some flash art tattooing, Oreskovich said anyone with a tattoo of Pearl will always be welcome to the festival.

For this year's Halifax Oyster Festival, audiences can expect 20 different oyster farms from all around the Maritimes. Photo credit: The Coast.

For this year's Halifax Oyster Festival, audiences can expect 20 different oyster farms from all around the Maritimes.

People in attendance can also expect the chucking championship, where amateurs and pro chuckers compete.

The oyster festival takes place on Sept. 23 and 24, and while the volunteering position to be the mascot is full, the event offers a lot of other volunteer opportunities. Learn more about the festival and opportunities on their website.

Listen to the CKDU story below: