Editor's Note: The service in Old Harry was led by CAMIs Heritage Resources and Communications Manager, Jonathan Patton, the CFIM journalist who produced this story.

The 36th Islands Canadian Ranger Patrol honoured the memory of veterans on Remembrance Day by laying the traditional wreath at the Cap-aux-Meules Memorial.

According to Sgt. Serge Chevarie, beyond the military protocol that oversees the organization (affiliated with the Canadian Armed Forces), the members of the Magdalen Islands Patrol adhere to the values associated to Nov. 11 on their own.

A few weeks ago, one of the members of the Islands Junior Rangers Patrol, Danyk Vigneau, received the National Youth Achievement Award, which comes with a $1,000 bursary. Vigneau says he was pleasantly surprised when he learned about the award.

Nancy Boisselle, who is in charge of the Islands Junior Rangers Patrol, says the 15-year-old was nominated for the award in recognition of his leadership, dedication and volunteer involvement in the community.

Here is Boisselle, speaking to CFIM in French:

While outdoor group activities were paused during the pandemic, they will resume again shortly for the Junior Island Ranger Patrol. 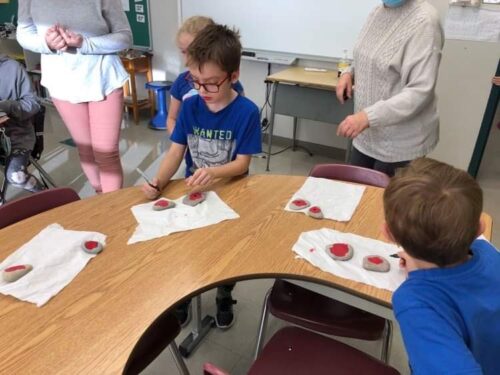 In the community of Old Harry, there was a Remembrance Day service for members of the community. The mayor of the Municipality of Grosse Ile and firefighters from Grosse Ile participated in the service.

This year marked the end of the Second World War — the service emphasized on Canada’s involvement and, particularly, the participation of Madelinots during WWII. The names of the 23 Madelinot men who did not return home from war were read aloud and a cross was brought forward by a firefighter which was laid in their honor.

During the week, the students of Grosse Ile School participated in Remembrance Day activities. At the elementary school, they painted poppies on rocks and discussed the importance of the poppy and what it represents historically. At the high school, Patton gave a presentation on WWII and Canada's efforts during those times.