Library called out for attempt to spark controversy

Members of the South Shore Black, Indigenous and People of Colour group are taking the library to task after they published an article on Wednesday by National Post writer John Robson.

The post offers the writer’s stance against the decision by the estate and publisher of Dr. Seuss to cease publishing six of his books featuring racist imagery or language.

The library has apologized for the post but spokesperson for BIPOC South Shore Jessika Hepburn says there needs to be more.

“I don’t accept apologies from my children. I tell them the best apology is changed behaviour. I ask them what are they going to do. An apology means nothing without meaningful action.”

The post was the first in a series by the library as part of their participation in the Freedom to Read initiative.

“We just wanted to foster, in the spirit of freedom to read and access to information, a larger, more open discussion of the merits of the titles that should continue to be celebrated.” 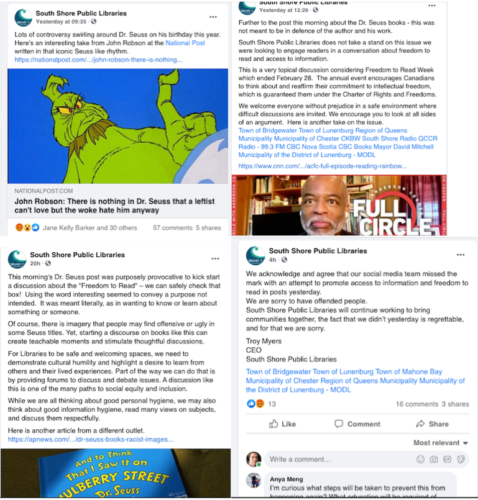 Reaction was swift as members of the public condemned the library’s intention to spark controversy.

Later in the day the library uploaded another video to their Facebook page offering a differing viewpoint on the Seuss discussion, but by that time the damage was already done.

Dozens of comments asking for the library to explain itself went unanswered*. Meyers attributes the silence to a lack of resources.

“We’re new to the world of how to manage social media and we don’t have a person who is directly responsible for it. We should’ve had a full-time moderator and we didn’t. We have people who are doing nine other things throughout the day and they help with our social media.”

Meyers says the library now recognizes social media was not the place to have this discussion.

Hepburn is concerned the library would have such a blind spot where issues of race are involved.

Meyers says members of the BIPOC community make up only a small number of the total staff working for the library and none of them were on the social media team responsible for the posts.

The offending posts were removed from Facebook late Thursday afternoon and by Friday the library’s apology post was deleted as well. Meyers says they’ve learned a valuable lesson and deleting the posts is part of an effort to move forward and correct their error.

“It was a mistake and it’s not to scrub the corporate memory, it’s just to be able to start the next chapter in this conversation which is how South Shore Public Libraries can do a better job, and to promote diversity and to work with our local BIPOC communities in Queens County and Lunenburg County and strive to do better.”

Hepburn says as an organization, South Shore Public Libraries need to educate themselves on why the posts were so offensive and upset so many.

“There’s a huge amount of work that needs to be done and the first part is to actually demonstrate some humility, to recognize that they obviously do not have the skills or the capacity or the knowledge to address these concerns and to reach out to the people who do.”

To that end, Myers says he had a conversation with a representative of the Bridgewater anti-racism task force and will be meeting with members of that group next week.**

“We’d love to have a member of their group join our board. And we’d love to have them help us develop some training modules that we can use and to help deliver them so we can make sure that people are sensitized to the issues that are important to us as a healthy diverse community.”

*A previous version of this story said the responses were answered. They in fact were unanswered and the story has been changed for accuracy.