Latest COVID restrictions could be lifted sooner than expected

Nova Scotians may not have to endure the stricter COVID conditions announced last week for as long as previously announced.

The province’s chief medical officer of health Dr. Robert Strang says the fact new case counts have stayed in the low single digits for the past several days may allow restrictions to be eased.

“If the pattern continues that we’re seeing, we may be in a position to lift restrictions much earlier than March 26. I know that will be welcome news,” said Strang.

The one new case of COVID-19 being reported in the Northern zone is a close contact of a previously announced case.

Strang said public health will continue to examine the epidemiology and will have more to say on the subject at Friday’s briefing.

Strang also addressed comments he’s heard questioning why the restrictions were put in place for some activities but not others. He’s concerned people are trying to compare two things that are not comparable.

“There is a science on how the virus is transmitted. Players at hockey games or other sports are not masked and they’re making contact with other players on the ice. There’s no physical distancing,” said Strang. “At an arcade, people are wearing masks, they’re staying physically distanced, they’re handwashing and equipment is frequently cleaned. So the reality is that this is a much safer environment than playing hockey or other sports.”

The chief medical officer said making recommendations to government to limit activities and place restrictions on businesses is something he doesn’t take lightly.

Strang said when it comes to the pandemic; he is always going to err on the side of caution.

“I’d much rather have to come forward and say we acted early and nothing happened and then look at how we can relax, perhaps earlier than we thought and explain that, rather than to sit here and explain why we didn’t act when we should have and have significant spread of the illness and all the impacts that will have,” said Strang. 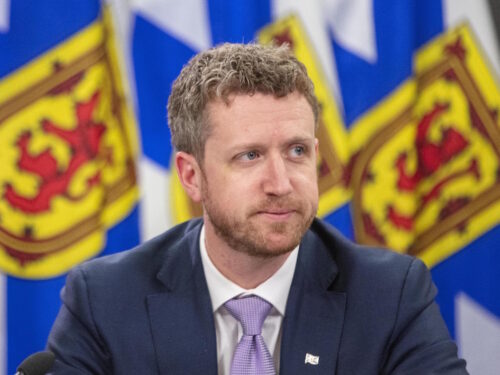 A $7 million rebate program launched today will provide service sector owners a one-time rebate of a portion of their paid property taxes.

Rankin said he understands the sacrifices being made by restaurants and many other small businesses and hopes Nova Scotians can follow their lead.

“They have stepped up and continue to do so,” said Rankin. “ I’m sure you’ve all read the reports of some pubs deciding not to open, for example, on St. Patrick's Day. Obviously a tough decision but one that speaks volumes about our business owners being leaders and helping to contain the spread of the virus.”