Justice for Workers Nova Scotia, a workers' rights group led by volunteers, is knocking on doors and asking community members to sign a petition that advocates for a $20 minimum wage with 10 paid sick days.

Suzanne MacNeil, a volunteer with Justice for Workers, said their petition to the Nova Scotia legislature also calls for further rights and protections for workers in Nova Scotia. 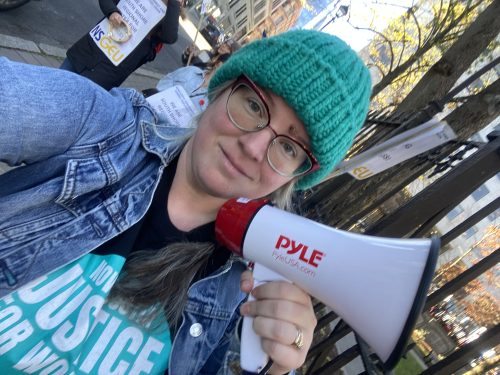 Suzanne MacNeil is a volunteer with Justice for Workers. Photo contributed.

"We have a good little crew of volunteers. I think our current list is at about 30 people across a few different communities that volunteer to go door to door, take their petition to the workplace, or help us with communications and getting the word out," said MacNeil.

The society was formally known as "Fight for $15 and Fairness," but MacNeil said with inflation rates, the COVID-19 pandemic and other factors, $15 wouldn't be enough to afford a sustainable living. She and other members started work on this petition earlier this year, and have been collecting signatures in the past few months.

MacNeil said it's important to support this initiative as there are lower-paid workers in the province who are having a real issue trying to make ends meet and are holding two to three jobs and working more hours.

"If you are a union member, you and your co-workers have negotiated paid sick days so that you know if you're sick or if your kid is sick and can't go to school, that you have the ability to stay home and get better."

Volunteers are going door to door to promote their campaign which supports worker rights. Photo contributed.

She added members are feeling torn between staying home and avoiding being paid, or attending work and risking spreading their illness if they feel unwell.

According to a report from the Canadian Centre for Policy Alternatives, the living wage in Halifax is $23.50/hour and, currently, the minimum wage at Nova Scotia is $13.60 an hour.

MacNeil said she would often knock on doors, give a short speech then collect signatures,  she said people were more engaging than she thought and would often want to jump in and sign support the cause before she is even done explaining.

She added that after two years of many people suffering from isolation due to quarantine from COVID-19, that it's productive to go door to door with neighbors and start this wage conversation.

"When we gather a few pages of signatures, we make a contact list to see if they would like to hear back from the campaign and if they would like to be involved. So once we compile that information, in the next month or so, we usually follow up with a phone call and invite people to the next action that's coming up."

MacNeil said she also lets community members know about the different ways they can contribute or get involved.

The society's next step and focus is to reach people in different parts of the province, to demonstrate the need for a higher minimum wage and improvements for workers.