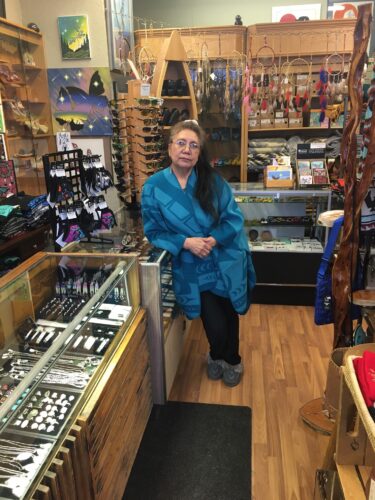 Angelique's Native Arts has been supporting Indigenous artists and artisans since opening it's doors in 1993. Photo courtesy of Angelique Levac.

Owner Angelique Marie Merasty Levac has lost thousands of dollars worth of merchandise in the past few years, experiencing two robberies in 2020 alone. As a small business owner and an artist herself, Levac prioritizes paying the artists and sellers she works with fairly for their craft meaning that these losses are significant to her business and the Indigenous artists and artisans she buys from. Also impacted is her sense of security.

Levac and her employees had been hesitant to report the incidents to the RCMP, fearing having to relive the experience to no end, which is what happened following the most recent theft on Dec. 12, 2020. Levac and her employee called 911 immediately following the theft, but the RCMP failed to respond to the call leaving the two women, both seniors, to pick up the pieces themselves.

“It’s really hard not to think that because I’m a native store… why don’t they care?” says Levac.

There is a well-documented history of racist police practices by the RCMP in Northern BC and elsewhere dating back to its founding days. As reported by CTV News, Michèle Audette, a commissioner for the inquiry into Missing and Murdered Indigenous Women and Girls spoke to the need for structural changes to address the systemic, top-down racism in the RCMP. Recently released findings from a study on policing in British Columbia, which used Prince George as one of three case studies, show that Indigenous youth were 41 per cent more likely to report discrimination by the police or courts than white youth and 300 per cent more likely to be handcuffed, arrested, or taken to jail rather than let go or given a ticket than white youth. Over policing and under responding to the needs of the Indigenous communities points to issues with discretionary policing and has far reaching impacts on social outcomes for Indigenous people.

When asked why the call was not responded to, the Prince George RCMP listed some variables that impact their decision about where to send officers, such as whether there are witnesses, surveillance footage, a receipt of value and how busy the detachment was at the time.

The incident at Angelique’s Native Arts on Dec. 12 met many of the stated criteria and Levac feels that, had the RCMP responded at the time, they would have had a shot at catching the culprit. Now, over a month after the fact, her faith in the RCMP has fallen to a new low. Levac hopes that a new security system will provide some protection in the future and expressed gratitude to Kym Gouchie for her concern.

The GoFundMe campaign is ongoing and can be found here.

Listen to the interview on CFUR-FM:

PrevPrevious PostPremier flip-flops on whether to ban or welcome travellers from other provinces
Next Post$50,000 donation pays off Liverpool fire truckNext
News by Radio Station