How do these billboards on Highway 16 get approved?

Along the 15 kilometer stretch of highway from one end of Smithers to the other, there are over 45 billboards. The subject of each sign varies from sugar filled DQ Blizzards to truck rentals to pro-life messaging.

The question of how these signs have come to litter the highway close to Smithers is a cyclical public query with rarely a satisfying answer. 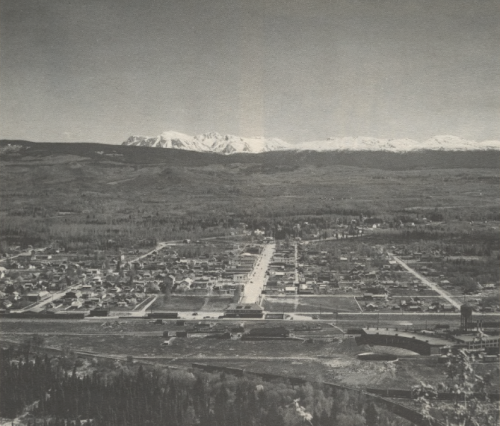 Back in the 1930s, the Bulkley Valley outside of Smithers was the wide open river-adjacent rolling valley of the Wet’suwet’en and farmland. Some of the land was owned by families that still operate farmland and agriculture on the same plot. But then, a proposed highway was to divide the land and make it easier to travel by car and transport goods into the community of Smithers by truck from larger urban centers.

The highway followed the route of the Canadian Pacific Railway line, and beginning in 1943, the highway was under construction, with the bulk of the work being done by interned Japanese Canadian men, during the forced displacement of Canadian born peoples of Japanese descent in Canada during the 1940s.

When established, the highway gave rise to traffic, as well as lifestyle traveling, which grew more popular leading into the decades to come.

Businesses were already well-established within the Smithers town lines. At that time, Main Street was still unpaved, but many individuals were operating small businesses for the residents of town.

It’s unclear when billboards began popping up along the highway, but on May 18, 1938, an Interior News article stated that Tom Brandon of the Quick Farmers' Institute complained to the Chamber of Commerce of "the indiscriminate placing of road signs which were spoiling the appearance of the countryside, particularly those signs placed on the government road reserve." It was decided to pass the issue on to the Associated Boards of Trade convention, and it doesn't seem that anything ever came of it.

Basically, all space is rentable, but the discretion and final decision of what billboards are sold to privately-owned properties is left to the land owners.

There are ad standards, of course, for any advertisement in Canada, but the oversight is not regionally managed.

According to the Canadian Ad Standards, The Code is broadly supported by industry and is designed to help set and maintain standards of honesty, truth, accuracy, fairness and propriety in advertising.

The provisions of The Code should be adhered to both in letter and in spirit. Advertisers and their representatives must substantiate their advertised claims promptly when requested to do so by Council.

Most of the ads along Highway 16 near Smithers are fairly standard for the region's business landscape: get a Big Mac at McDonalds, rent a truck at Frontier, call Jade for First Aid and Security. Those are clearly adverts. But what about on-offs like “end the lock downs!” or “food shortage coming!” Are those advertisements? And if they aren’t, do these public messages need to follow the same standards as the business billboards? 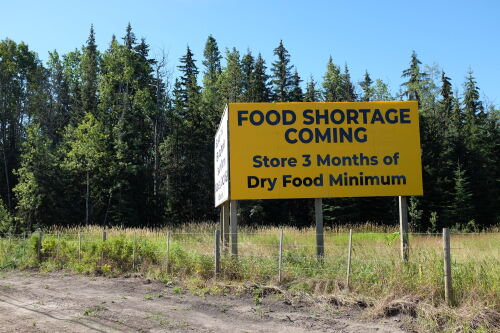 A current sign along Highway 16. Photo by Pam Haasen.

According to the Interpretation Guidelines and Code Provisions portion of the Canadian ad standards document, “Advertisements must not exploit superstitions or play upon fears to mislead the consumer.”

But one could argue that foretelling of a food shortage, at a time when people are already food insecure, might "play upon fears" of the customer.

Mark Fisher, electoral-area director for Smithers (Regional District of Bulkley Nechako), said that "if the property is privately owned, it’s not the regional district’s job to engage and change land use due to a couple of complaints every couple of years."

These signs are here to stay, but if you’re a person who is tired of pro-life messaging, or a particular use of billboard-space, the change you want to see is only about $2,000 away from happening, if you can find the space.

Listen to the audio of this article in the link below: