The Homes Not Cops rally organized by P.A.D.S. took place at the old memorial library on Spring Garden road at 5 p.m. on Thursday.

The rally was organized on the same day of last year's protest where Halifax bore witness to a police crackdown on encampments on Aug.18, 2021, leading to some arrests and many unhoused people moving to Meagher Park.

Criminal Defence Attorney Asaf Rashid is representing 18 people that were arrested during the protest last year. 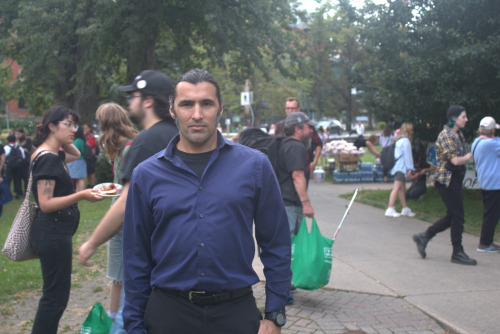 The arrests happened when community members were showing support to unhoused folks who were forcibly removed with nowhere to go. Rashid said the response they received was police violence.

"What happened on that day, there were instances of police punching, kicking people, hitting people with bicycles, pepper spraying people, including a child. There were a number of injuries that resulted from that, of course, there are the arrests," said Rasid.

Last year, Rashid was contacted by a few people and ended up representing 18 people. Today, 11 of the 18 had their charges dropped, either being dismissed or withdrawn or due to legal technicalities.

"One person went through a program called restorative justice. And that's still ongoing," Rashid said. "And now there are six that are still set for trial. And those trials are set for May of 2023, which is a long way away."

Rashid intends to raise another matter on Feb. 6, to ask the court's permission to raise an issue about whether the police actions on Aug.18 were unlawful, since they violated the rights of the people in the encampments.

"If the courts find that those rights were violated, and that the police made the arrests during the course of an unlawful operation, [arrested] people were charged with obstruction of police officers and assaulted peace officers charges- and all those charges require that the police are acting lawfully at the time," said Rashid.

If Rashid manages to get his case heard, then the case will be heard on March 14-15.

"People need housing, and they need it now. And there needs to be accountability for what happened last year, with enough pressure. I think with enough organized people, then there can be some success in all these fronts." 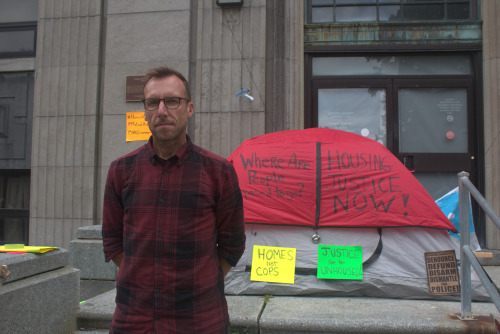 Drew Moore is a volunteer at P.A.D.S. Photo by Sara Gouda.

For the past year, P.A.D.S. (Permanent Accessible Dignified Safe Housing for All) Community Network volunteer Drew Moore has been advocating for a moratorium on park evictions.

Moore said the Homes Not Cops rally addresses two levels of government homes, the first being provincial, as housing is within the jurisdiction of Nova Scotia and that there is a real need for investments in public housing at this time.

Second, P.A.D.S. is requesting a moratorium on evictions by police, people sheltering in tents and parks while addressing the "extraordinary level of surveillance" unhoused persons are being subjected to.

"The reality is there's a lack of housing options, shelters are largely full, the city speaks of modular units but those are all full and spoken for, or already have a list of referrals. The designated sites are filling up, but some of them aren't filling up because people will go where they need to go to feel safe," said Moore.

Moore said some ways concerned Haligonians can help is by calling our MLA and MP, to request urgent measures to address the homelessness crisis.

"What we know is that one of the primary consequences of park evictions, when there are no housing options is people just end up setting up in another park," said Moore. 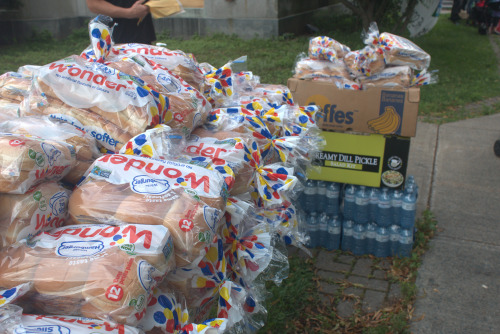 Out of the Cold Community brought enough hotdogs and burgers to feed 500 people. They also gave out burritos and drinks. Photo by Sara Gouda.

Michelle Malette is the executive director for Out of the Cold Community Association. Out of the Cold have two supportive housing sites, one in Halifax and the other in Dartmouth. Each is able to house 63 people in a supported environment.

The organization supports people with mental health issues as well as those with substance and alcohol use. Out of the Cold reintroduced a street feed saying it was important for them to take part in the Homes Not Cops rally.

"We started doing street feeds once a week and we feed about 250 people. We don't ask about income. We don't ask about whether people are housed or unhoused but typically, we did it here because people were living here last year and because it was an area of community for people to gather," said Malette. 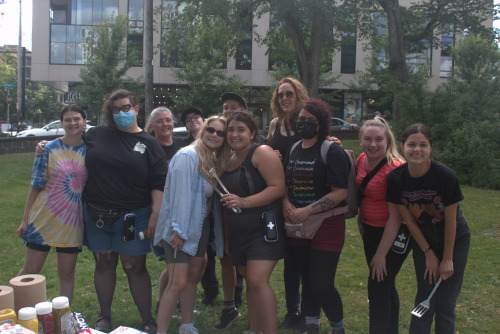 Out of the Cold Executive Director Michelle Malette and volunteers organized food and drinks for the Homes Not Cops rally. Photo by Sara Gouda.

Last week, human rights activist Vicky Levac spoke with CKDU on the forced enclosure of People's Park, saying the alternatives the city provided were temporary housing 'band-aid' solutions. She said the choices were not safe options for many unhoused folks with disabilities or substance use issues. 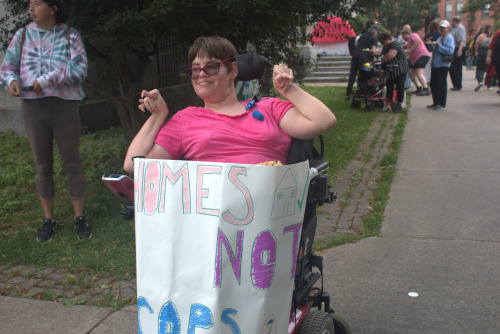 Vicky Levac is a human rights activist and has been a volunteer at People's Park for over a year. Photo by Sara Gouda.

"I'm a student and I'm just here to support what's being held by P.A.D.S. network and mutual aid. I just think what they're doing is great. I'm in the process of trying to get more involved with OTC (Out of the Cold), so I just came to show my support," said Geldart. 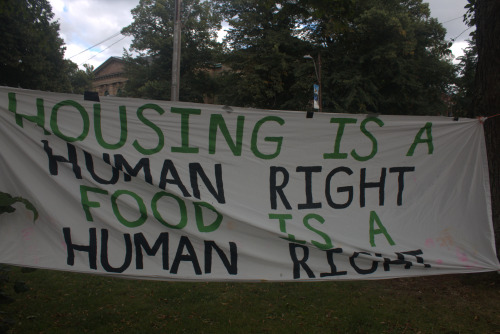 Some ways Haligonians can help is by reaching out to elected officials, and asking them for urgent measures to address the housing crisis. Photo by Sara Gouda.