Residents around Eagle Head Beach are sounding the alarm about the ecological impacts of a new house being built just off the dunes.

A group of beach users has formed a Facebook page called Protecting Eagle Head Beach to share information and raise awareness of the changes being made to the natural environment.

One of the Administrators of the page Talla Corkum says they’re hoping to see more concrete action taken to save the beach.

“Making sure all the permits are there, even seeing if there’s a way we can get a stop-work order.”

Corkum says the group is not only concerned about the changes to the environment but also the loss of access to the beach.

She says the large trucks coming and going are destroying the road and once the new house is built it will essentially become a driveway barring people from accessing the beach from the Eagle Head wharf side.

“Trying to prove the right of way and regain the right of way onto the beach. Especially now with the ruts that have created these big puddles, we have now lost access, walking access, to the beach from the side on Eagle Head Wharf Rd,” said Corkum. “Unless you wear boots up to your knees you can’t really get down there anymore.” 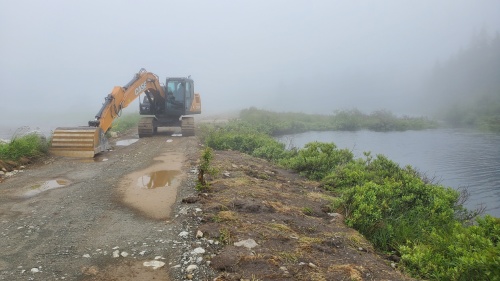 Region of Queens Mayor Darlene Norman spoke with officials at the provincial public works department and learned the road was previously recognized but that may not be enough to prove the existing road is public.

In 2019 the province passed the Coastal Protection Act to help ensure that new development happens high enough and back far enough to be safe from coastal flooding and erosion as well as preventing unnecessary interference with Nova Scotia’s coast.

The act is now waiting on regulations to be drafted before it will be enforced.

A spokesperson for the Department of Environment and Climate Change says this a huge piece of work that requires extensive collaboration, in additional to the consultations that’s already been completed.

Government anticipates the new regulations will be ready in 2023.

Corkum says if the Coastal Protection Act had been in place, none of this would have happened.

She says the group will press on with letter writing campaigns and contacting elected representatives, department officials and environmental groups in the hopes of getting someone to put a stop to the development before too much of the property is permanently altered.

However, she fears what happened to Eagle Head Beach may end up being a warning for other coastal areas in Nova Scotia.

“From this point now, we’re realizing that there might not be so much capabilities of saving Eagle Head Beach. Now we are more just using this as grounds to help other coastal areas in Nova Scotia. To try and make our voices heard. Maybe get the bill moving faster. Maybe even, another community will learn from us and we can help them. Just generally trying to protect the coast, especially now considering when you drive down the highway it says Queens Coast and there’s a lot of issues around the coast,” said Corkum. “I know that if we are the ones to make our voices heard it might prevent other people from in-filling, knowing where the community stands.”