After learning about the 215 unmarked graves that were found in Kamloops B.C. last year, a Halifax transcriber was inspired to help the community by creating a Mi'kmaw braille code to help blind Indigenous people.

Christine Muise has been a transcriber for 15 years; she first started working on the new code last year after noticing that there weren't any Indigenous braille codes available in the community.

"My work on that began last April of last year, there was talk of a resurgence in people wanting to regain their languages. And I knew from the few times I had come across Mi'kmaw textbooks in Nova Scotia, that there really were no braille codes available, so I started looking into whether anyone was working on it," said Muise.

She said her purpose behind this initiative was to support and promote the use of Indigenous languages, including Indigenous sign languages, as there was a need for it.

Endorsed by Braille Literacy Canada, Muise collaborated with linguist Dr. Bernie Francis, co-creator of the printed orthography, as well as consulting with Dr. Robert Englebretson, a blind linguist from Texas, and received approval from both Mi'kmaq chiefs in Nova Scotia and Maine.

The code has been finalized across Canada, after being accepted by Braille Literacy Canada as well as the Braille Authority of North America and will soon be added to the World Braille Usage.

In honour of the Mi’kmaw Braille code she developed, Muise earned this year's Louis Award from the American Printing House for the Blind. 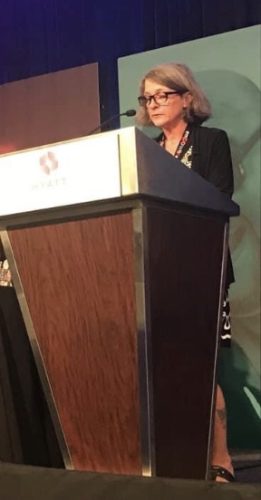 Christine Muise received the Louis Award at the 2022 meeting of the American Printing House for the Blind. Photo contributed.

"It's technically called the 'Creative Use of Braille award,' and it's a real honour. It's not given annually, which just makes it more special. I guess it's only been given out five times since 2003," she said.

Muise said her she hopes to see the code implemented at Halifax's community centres such as the Mi'kmaq Friendship Centre.

"I think that the awareness needs to be out there now that [Mi'kmaw] is Nova Scotia's first official language. I definitely look forward to seeing it more," added Muise.

Last year, Nova Scotia Premier Tim Houston, among 13 chiefs and a slew of other dignitaries, announced the proclamation of the new Mi’kmaw Language Act.