After two very intensive weeks, the frequency of bear raids along Squirrel Cove road, on Cortes Island, appears to be decreasing.

Sandy Hoffman has been keeping tabs on developments locally.

“Thursday night around 11 p.m. the bear went through on Graham [Blake’s] property by the trail cam, which is between our properties, but on his side," Hoffman said. "It was coming out from [Basil] Creek. So I would guess that it goes down my driveway. That’s all connected to the logging road that goes out my driveway to [Squirrel Cove Road].”

Hoffman said there were no incidents reported on Thursday or Friday and that the last anyone heard was that it was back at Laurel's on Sunday night.

The bear had not found anything to eat at Bohart’s, but did get into a neighbours compost.

Laurel Bohart described what she saw, walking beside Basil Creek.

“The trail is broader than it used to be, so we think the bear is coming and going fairly frequently. Up and down the edge of the creek, through Nancy’s property at the back and down along the trail below her,” said Bohart. 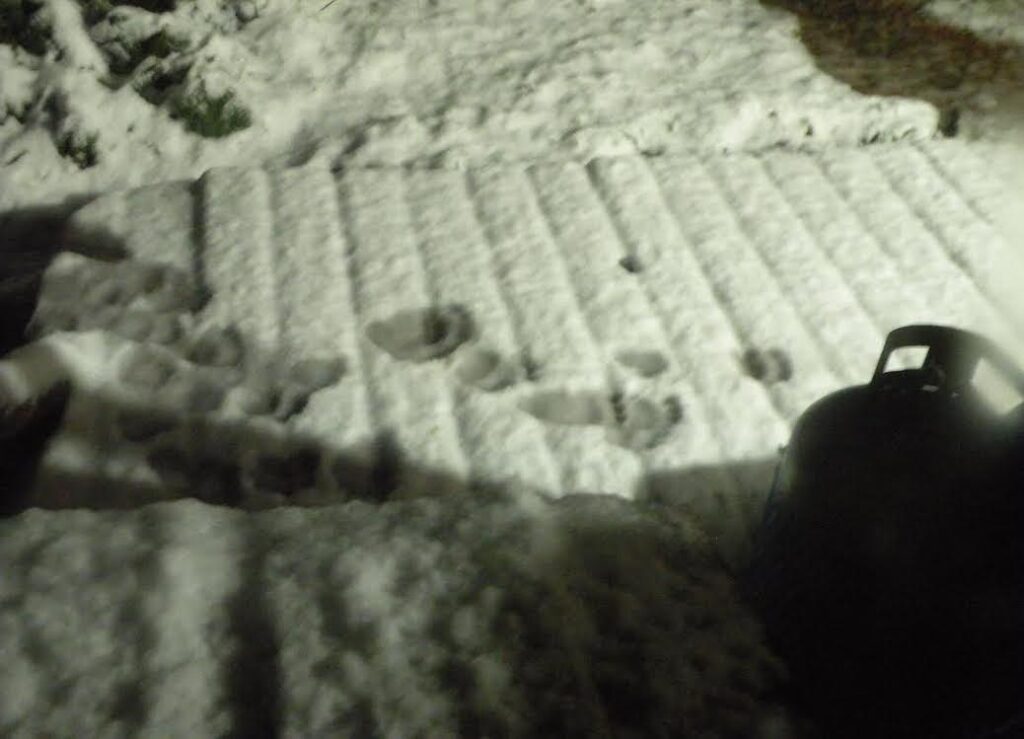 Black bear footprints on the porch of a home in Squirrel Cove. Photo courtesy of Leslie Perdisa.

Bohart said that there was no trace of scat but that the ground was trampled.

“It’s not disturbing freezers. It is actually a very polite bear. It’s coming along, poking around to see if there is anything good [to eat] and then leaving again," Bohart added.

“I think he put fresh compost in there. I wish he’d tossed it somewhere else. Sandy puts her’s in the bin at the recycling centre. Oh thanks Tom, that’s fresh stuff. Oh well, it is mostly lettuce.”

“The bear will go for lettuce. I think this guy specializes in compost, what do you think?” she added.

There have been at least three attacks on buildings and all of them were apple related.

“Well, the bear ate all of our apples that it could find the first time, so there is nothing left. Well, we locked the door to the house, so it can’t get in the house where the apples are – and it hasn’t tried getting in,” said Bohart.

All of the attacks on buildings occurred last week. As mentioned in CKTZ's first report, the bear burst open the door to Leslie Perdisa’s cellar and was driven off while it was ripping the siding at Mack-Mumford’s. CKTZ just learned of the incident.

“[The bear] didn’t break in, but it was trying. It broke the dryer vent off of our wash house on the outside – because it could smell apples in our washhouse, apparently," said Nancy Beach said. "It was also clawing at the lock on the door and it ripped a little bit of the sheathing off the door at the bottom. There was some cans beside it as well, with some liquids – which he bit into. He probably didn’t like the taste of those very much.”

“It returned the next night, I think, and then squashed the vent pipe …” she added.

That was a week ago. 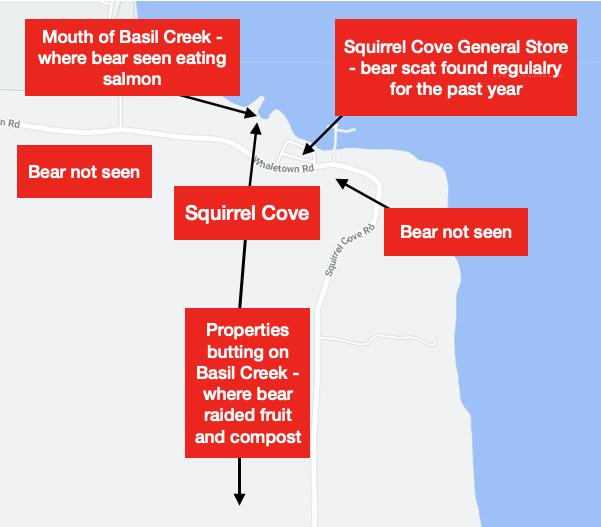 “Maybe the bear is spending more time in the creek? Maybe it’s getting ready to hibernate? I don’t think the bear has moved on if it was at Laurel’s on Sunday night – at least the one bear and it could easily be more than one bear,” said Hoffman.

“I think there are two bears. I think there is a larger one and a two year old female with small paws – but that is a guess, I don’t really know,” said Bohart.

A word of advice

Sandy Hoffman has some advice for people whose houses have not yet been raided.

“I think the number one thing is to make sure you don’t have anything like fresh compost, apples or any attractants out because once the bear has been to your place, and was successful, it will continue to come back. They are very optimistic creatures," she said.

"The bear has come to our place three times after there was nothing left. There are no attractants, but it was successful one time and remembers. It keeps trying," Hoffman added. "I don’t know how many times it takes before the bear says ‘okay, enough already, I’m not coming back there anymore.’”