With food insecurity continuing to be a prevalent societal problem in BC, especially in the wake of the Covid-19 pandemic, Caitlin Boudreau, a dietician from Fairfield, is taking matters into her own hands.

In late 2019, Inspired by the Little Free Pantry trend circulating in the United States, Boudreau sought out to build a free pantry in her community of Fairfield in collaboration with the Fairfield Gonzalez Community Association. “It really inspired me to want to try to do something in my own community. So that's kind of where the idea was born.” said Boudreau.

Boudreau states that the idea of setting up a food donation site elicits mixed feelings because even though the idea would positively affect the community, ideally it wouldn’t be necessary. “I always feel so mixed when I talk about these things. Because it's really again, I think, ideally, it's not even something we need to have, but it is getting used. So in that way, it is a success. Like it's definitely getting used. I've been told that it’s getting used and people are restocking it so is that part is really has been a success, I would say so far.” said Boudreau. 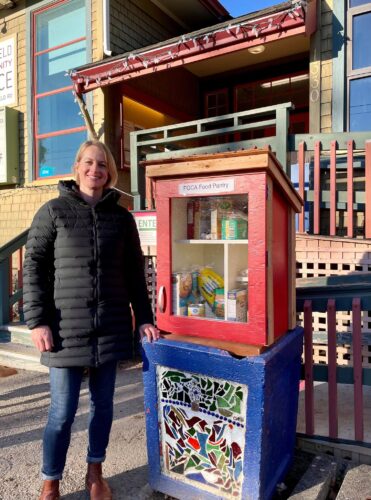 Boudreau moved into her work as a dietician after her time as a competitive swimmer sparked an interest in health and nutrition. That line of work, she states, is what put her in proximity with the issue of food instability.

She said, “I do work as a dietitian with the Kool Aid health center. So I see people struggling there on a daily basis with accessing appropriate healthy foods. I did think, you know what, if I'm going to try something like this out, it really makes the most sense to be doing this in my own community where I live, just in terms of it being close to me where I can keep some eyes on it.”

There is a misconception that Fairfield, a relatively wealthy neighbourhood would not be in need of a service like this. However, Boudreau states th

at the nature of food insecurity puts people from all walks of life at risk.

“There's all different kinds of people and in all kinds of different situations. So that's the tricky thing with food security and insecurity, too, is that you can be food secure, you know, one month or one year, and then something happens, and maybe you lose a job or  have an illness, and then all of a sudden you're struggling to get food on the table.” said Boudreau.

Along with providing access to food, Boudreau hopes to reduce the stigma associated with food insecurity. Boudreau said, “I think it will always probably be there to some degree, but I really did want to reduce it to a way that it's again, very casual and open seeing it and using it. So that's definitely my goal for it. And just also the accessibility part that you know, there is the mustard seed, which is incredible organization, but not everyone can get down there or wants to use it. So I thought this was a nice way to just bring it to right to the community.”

Download Audio
PrevPrevious PostConduct Becoming plays through the pandemic, but an album is unlikely
Next PostEOS wants to help you get (sump) pumpedNext
News by Radio Station