Over 7,000 First Nations people have been immunized on Vancouver Island

First Nations communities on Vancouver Island, such as Namgis, Snuneymuxw and Cowichan Tribes, have seen serious outbreaks of the disease since the start of the pandemic. Cowichan Tribes has reported a total of 249 confirmed cases of COVID-19 by March 1 and five people in the community have died from the disease.

Dr. Shannon McDonald, acting chief medical officer for the First Nations Health Authority (FNHA), says that there are several factors that are contributing to First Nations people being disproportionately impacted by COVID-19.

“In many of our communities there is a high rate of individuals who live in multi generational homes or where a lot of people live together,” she said. “So when somebody who is positive for COVID, unknowingly, shares that joy with the people they live with, rather than having one person who may be a partner getting COVID, it could be as many as seven, eight or more in a household.”

McDonald says that the close-knit nature of many First Nations communities means that “often there would be, despite our advice, lots of visiting back and forth for cultural ceremonies and shared resources.”

She notes that once COVID-19 is in the community there may not be as many places for people to isolate, such as hotels, that people off reserve have available to them.

“The concerning part, of course, is that we have many people with serious chronic diseases that put them at larger risk for serious consequences, hospitalization, and even deaths,” McDonald said. “And we've seen that in our community, sadly.”

The lone exception to this trend is in the Fraser Health region where the percentage of cases of COVID-19 among First Nations is slightly lower than the First Nations population. Fraser Health has also seen the most cases overall, with a total of 49,578 cases as of March 8.

According to FNHA data, a majority of the 5,345 cases of COVID-19 among First Nations people in British Columbia as of March 3 have been people who live off reserve. 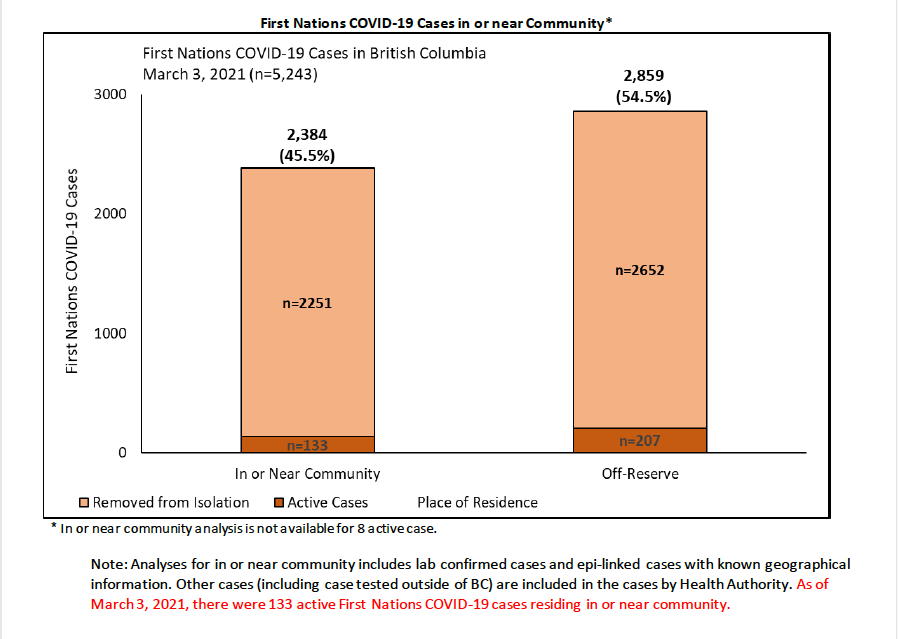 According to Victoria Schmid, Island Health’s vice president of pandemic planning, over 7,000 First Nations people have been immunized in the Island Health region. Currently, Indigenous elders 65 and up can book a vaccination appointment and there are also plans to run clinics for remote First Nations communities where all members will be immunized in a couple of days.

“This is so important because we know that here on the island, if you are Indigenous your chance of having COVID or dying from COVID is over five times what it is for non indigenous members of our communities,” she said. “It’s so important that we've been able to move forward with that vaccine distribution.”

In addition to the 19 regular immunization clinics that Island Health is organizing, the health authority is also partnering with the Greater Victoria Friendship Centre, the Port Alberni Friendship Centre and the Sacred Wolf Friendship Centre in Port Hardy where vaccinations will be provided, according to Dr. Mike Benusic, the medical health officer for central Vancouver Island.

All Indigenous (First Nations, Métis and Inuit) peoples born in 1956 or earlier, elders and additional Indigenous communities not immunized in Phase 1 can currently call to book an COVID-19 shot under B.C.’s Immunization plan.

Providing immunizations for First Nations people in a culturally safe way is part of the effort to help build what Dr. McDonald calls “vaccine confidence.”

The “Vax Champs” campaign by the FNHA shows pictures of First Nations leaders and elders on the FNHA getting a shot of the vaccine with a short message of why they choose to be vaccinated.

“You hear a lot about vaccine hesitancy, but I think we're trying to turn that around to give people vaccine confidence,” said McDonald. “And if people are unsure, sometimes it helps to see that people they know, who's who they trust, have made the decision.”

But even with the vaccinations rolling out across First Nations communities and the province as a whole, there is a long way to go before things are back to normal.

“Some people have thought they get the shot in the arm and they're free to go and, unfortunately, that's not the case,” said McDonald. “Until we get that community immunity well in place, we'll still have to follow public health methodologies and advice for a while yet. So hang in there, stay the course, and be good to yourself.”