Election 2020: Towards a more sustainable forestry

A recent study found that about 3% of our forests are composed of the giant trees that most people think of as old growth, yet they are still being logged on Vancouver Island. At the same time, young second and third growth trees, with a high percentage of sapwood, are also being marketed. Yet forestry workers are losing jobs. What light can the candidates in this election shed upon the path towards a more sustainable forestry? 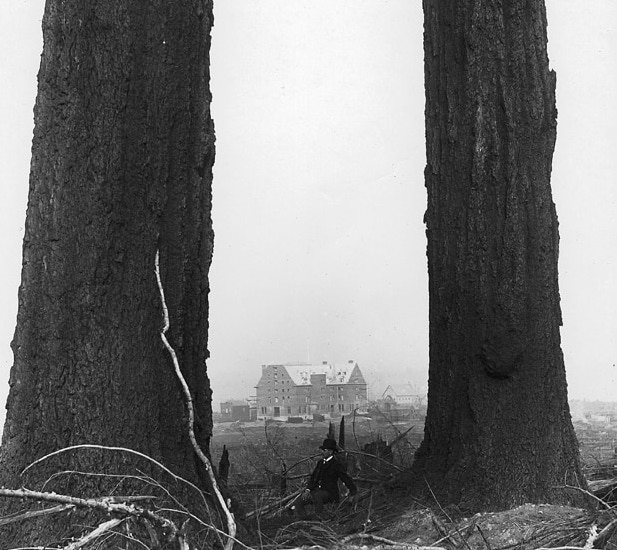 photo credit: “Coast Douglas-fir in Vancouver 1887” by William McFarlane Notman – This image is available from the McCord Museum under the access number VIEW-1803 & licensed under Public Domain via Commons.

As David Shipway, a local builder and Vice President of the Cortes Community Forest Cooperative explained in a previous interview: “Sometimes you can use a mix of heartwood and sapwood for visual effects, but only indoors where it is going to stay dry. It can be used as a visual feature in cabinetry because it is kind of interesting to have the two colours, but if you are building outdoor stuff you want to stay away from sapwood altogether. It’s only got a few years and it’s rotted. If you build a sundeck that has any sapwood in the cedar, that wood is rotten within five years …”

It doesn’t need to be that way 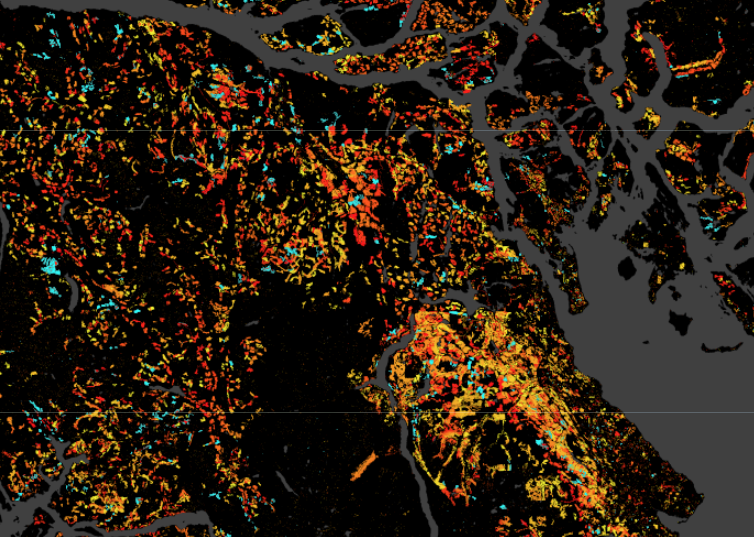 Screenshot of our area from the University of Maryland website depicting the tree loss between 2000 and 2019. Each year is a different colour. Click on https://earthenginepartners.appspot.com/science-2013-global-forest

Given his many years in the industry, BC Liberal candidate Norm Facey may have some valuable insights. Forestry was among the questions I sent him.

A member of his team emailed, “We respectively decline the offer as we prepare for other venues . Several of the questions proposed have, or will  be addressed in other news venues by the NI team and/or as part of the  larger Liberal platform news releases. They can be sourced online.”

One of these news releases claimed the forestry revenues have dropped over 40% since 2018 and 6,000 jobs have been impacted by shift reductions, curtailments and closures.

This press release stated, “The NDP-Green coalition has totally failed the resource industries that are the bedrock of our economy, leaving Interior and Northern communities adrift in the face of serious threats to our way of life … We are the only party standing up for rural BC, and the way of life that the NDP have written off and walked away from.”

“The old growth management strategy that John Horgan’s government passed in September 2020 specified that it would protect approximately 353,000 hectares of old growth forest. More importantly, it shows that our approach is a new and holistic one, that will protect old growth forests for British Columbians today and for future generations. It represents a break from the divisive practises of the past and brings together indigenous leaders and organizations, labour and environmental groups to find a path forward that protects biodiversity, while supporting jobs and communities.”

“Under the Liberal government, processing went down; harvesting went down; employment went down. The only thing that went up was raw log exports, but  dovetailing on the old growth management strategy is the Coast Forest Sector Revitalization that was launched in 2019. It speaks to building local processing into our policy and ensures that more fibre is available to domestic mills. It also speaks to sustainable forest practises.

“Former Minister Doug Donaldson has said that we can no longer apply yesterday’s thinking to today’s challenges and that we need to shift our approach away from the status quo and create markets for fibre that until now has been left in harvest areas. Changes to waste policy will redirect some of the approximately  two million cubic metres of waste wood on the coast. That is enough wood waste to fill 800 Olympic size swimming pools. It will be redirected to pulp and paper producers and the bioproducts in the bioengineering sector, supporting Clean BC’s Bioenergy strategy.”

“This is a great start. We have achieved a lot and there is so much more to do.”