On May 27, 2020, in the High Park neighbourhood in Toronto, Regis Korchinski-Paquet, a 29-year-old black-indigenous woman, ended up dead after an encounter with Toronto police. The police were originally called by her mother to try to de-escalate an unsafe mental health situation.

All of this is under several investigations, so I’m very careful with words.

One of those investigations – the one by the Special Investigations Unit, the SIU – unit that’s supposed to investigate police misconduct in Ontario, cleared all the police officers that were at the scene.

The decision sparked a new set of anti-racism protests across Canada, a series of protests started after the murder of George Floyd in the States.

Whatever the truth is, and probably only people who were in that apartment know what it is, the case goes to the list of cases in which people with mental problems ended up dead after coming across police officers in Ontario, like Ejaz Choudry, Ian Pryce, and Andrew Loku, among others.

In Toronto, an organization Doctors for defunding police started a petition, now signed by 622 Canadian doctors and health professionals, warning that policing in this country is a public health crisis and calling for a change on how this society is reacting to mental health, and other issues.

In this program, we’re talking with doctor Suzanne Shoush and medical student Semir Bulle, from the University of Toronto who started the organization.

Background:
The letter and signatories can be found here: https://doctorsfordefundingpolice.com/ and oyu can find Doctors for Defunding the Police on twitter: @DrsDefundPolice 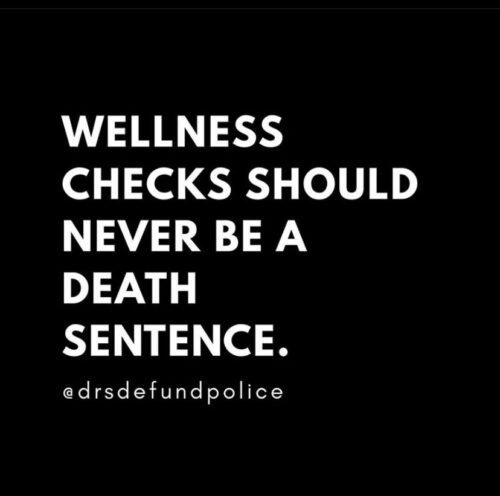 White text in all capitals on a black background reading "Wellness checks should never be a death sentence. @drsdefundpolice". Image courtesy of Doctors For Defunding Polcie