The CCFC, along with the Klahoose First Nation, forms the Cortes Community Forest General Partnership ("Partnership," or CFGP). 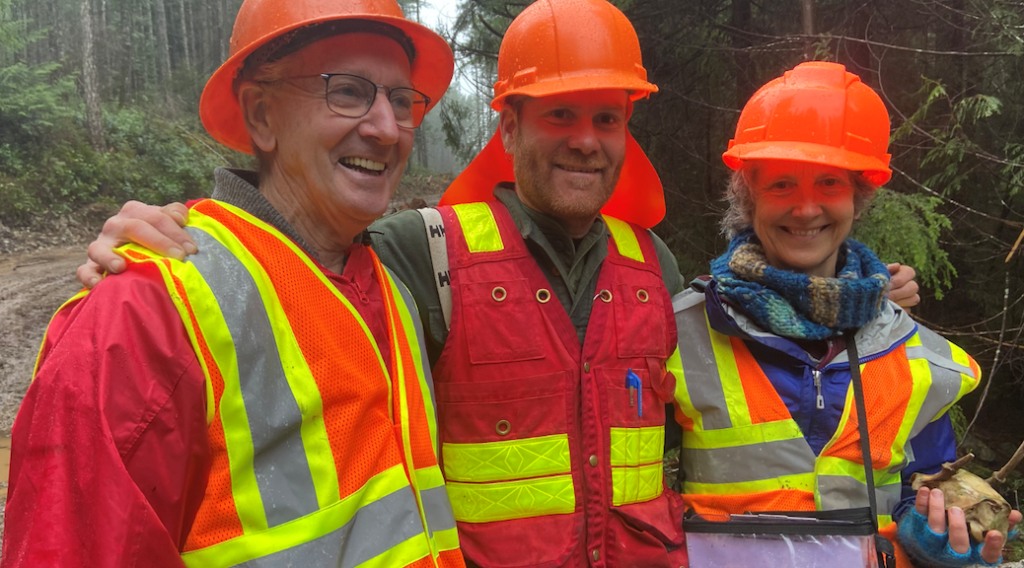 The meeting began with the treasurer’s report from Aaron Ellingsen. CCFC receives disbursements from the Partnership and recent expenditures include funds for ground-truthing; a joint event with CCEDA and Folk U on “Making It on Cortes;" and a donation to the Klahoose Tribal Journey, in appreciation for Klahoose generosity in sharing the community forest tenure and for its good partnership.

In the president’s report, Carrie Saxifrage spoke of how everyone can be proud of the community forest for its progress in economic reconciliation, local opportunity and logging which is attentive to the island’s thriving ecosystems. She mentioned the challenge of building consensus around an endeavour that has many different goals.

Her focus is ground-truthing the community forest to get a handle on the accuracy of provincial data. Teams of volunteers have been going to randomly selected points to measure tree size, species and ecosystem type.

In this multi-year effort, the team has assessed 20 points, halfway to their goal of 40. Carrie pointed out that ground-truthing is expensive and time consuming. Forty points in the 3,800 forest is not many. It will give a very rough idea of provincial accuracy, but not a precise picture of the island’s highly variable forest and topography.

Carrie thanked the Partnership for supporting this work, which arose out of a resolution from the floor in the CCFC 2018 AGM. The Partnership hired Forester Andrea Lang to create a credible methodology and train local volunteers. Carrie spoke of how interesting it is to bushwalk to random points on Cortes and encouraged strong walkers who want to learn some technical skills to join the effort. She thanked Bruce Ellingsen, Sonya Friesen, Mark Lombard, Lisa Ferentinos, Wayne Roberts and Andy Ellingsen for their great work on this project.

Mark Lombard, the operations manager, gave a report at the meeting. He said, among other things, that this year marked the first time that the CFGP used thinning or single stem selective logging. He is personally very excited about that — it is the holy grail of sensitive, ecosystem-based forestry. The new practice relies heavily on Nick Gagnon’s specialized equipment which was refurbished this fall through a Cortes Island Economic Development Association loan. 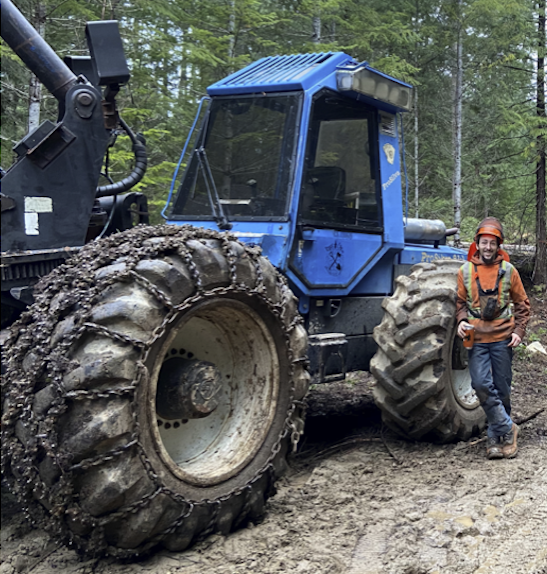 Mark also reported that this year, for the first time, all the logging was carried out by local people. He said that the Community Forest is installing gates to prevent firewood poaching and road erosion.

Nicholas Gagnon, a director on the CCFC board, spoke next. He reported that the CCFC efforts to create an entrepreneur incubator have been underway this year. The main effort was around a pilot project to provide a loan program to folks wanting to create a value-added business making use of Community Forest wood. That event, Making It On Cortes, was co-sponsored by the Cortes Economic Development Association and Folk U.  Nick hopes that further programs will be available for support and business planning.

Maureen Williams began a presentation with a heartfelt recognition of privilege, the desire to contribute to a reconciliation of the harms of colonization, and gratitude for the opportunity to be on the CCFC team.

She reported that the Community Forest Operating Plan has been renamed the "Community Forest Management Objectives." The name change, she says, is to better reflect the intent of the document.

Maureen made the case that, while the CCFC is a small operation, BC forests are becoming a carbon source (as opposed to sink), and responsible forest management is more important than ever.

She reviewed some community outreach efforts that were made in the past year. This included a value-added wood industry development evening and operations tours to promote the use of local wood in the community.

Bruce Ellingsen, a founding member and elder to the Community Forest, expressed his sense of satisfaction in seeing the Partnership develop and begin to really express the long-held vision to conduct forestry in such a way as to let the forest as a whole age into old growth, while also creating jobs and protecting ecosystems. He added, with a note of sadness, that Cortes Island is on its way to shining brightly as a ‘green jewel’ in the Georgia Straight – one of few places managed for healthy, old, intact forests.

Every director who presented made a special point of expressing gratitude for the Operations Manager, Mark Lombard, for his depth and breadth of knowledge and extensive volunteer effort.

Next, elections were held for three board positions, while four others were mid-term.

Maureen Williams was elected, replacing Ralph Garrison. David Shipway and Aaron Ellingsen were re-elected by acclamation. Mark Braaten and Carrie Saxifrage are serving their third year, of a three-year-term. Nick Gagnon and Matt Cuscianna are beginning the second year of their three-year-terms.

This concluded the business portion of the AGM, and members were invited to participate in some open conversation, offer comments and ask questions.

A member asked about the consumption of Community Forest logs for firewood — how does this work in relation to the economic benefits of the forest? And what can be done to address the demand-side of the firewood equation on Cortes?

Mark responded that the usual price of a load of firewood, around $250, does not include anything in the budget for logs — that is just enough to cover bucking, splitting and trucking.

There is a cost of $150/cord to the Community Forest to get the wood to the roadside. It is difficult to make an economic case for selling marketable logs for firewood from the community forest, unless the logs are otherwise unmarketable. While community firewood days will continue, there is no way the community forest can supply the island’s firewood needs.

A question was then raised on wildfire risk. A member of the CCFC pointed to fires in Oregon this year, a place with a similar climate to Cortes, and asked what measures are being taken to reduce the wildfire risk on Cortes. Mark responded that for fire prevention, the CCFC this year identified specific preventative measures and areas, and has updated the wildfire plan for Cortes and is currently applying for grants to do the work. We are in a low priority area, Mark says, the interior of BC gets a lot more funding, as the risk is higher. With climate change upon us, he added, the risk is rising.

Mark went on to say that thinning can be a good measure to reduce the wildfire risk. And the Community Forest is working toward that end, especially where the "operating area" is adjacent to residential areas. In one location under particular consideration, the trees are small and low-value – so this may be a break-even proposition, economically. But with multiple benefits to the community including paid work, firewood, wood chips and wild-fire risk mitigation, the case can be made to undertake this effort.

The meeting also explored the opportunities to get children out participating with CCFC activities, especially the scientific endeavours. The directors expressed support for this, suggesting it would likely have to wait for COVID to pass.

One member asked whether there had been any efforts to share with the outside world what the Cortes Forestry General Partnership has been up to, so that successes could be replicated. The directors agreed that this has always been part of the mission. Aaron Ellingsen responded that the Ancient Forest Alliance has been contacted and is interested in the community forest. Jeramie Peacock added that before COVID, there were plans to host some international foresters and some professors from UBC. Those connections and visits have been put on hold during the pandemic.

And finally, one member who lives in Coulter Bay, stated she had grown quite pleased and supportive of the CFGP efforts.

For more information, go to https://cortescommunityforestcoop.org.