There is a new proposal for the cell phone tower that Telus is looking to build in Mansons Landing, and Cortes Island community members are weighing in.

Brian Gregg, with SitePath Consulting, is heading the consultation process, as contracted by TELUS. On Nov. 17, Gregg announced the new proposal on behalf of Telus to the Cortes community. The third proposal for the tower shows it located 100 meters from the second option they previously offered the community on Southern Cortes Island.

It’s been over a year now that Telus has been proposing sites for a new tower in Mansons Landing. CKTZ presented a two part story on the situation in January 2022. and responses from residents and community representatives with the Strathcona Regional District (SRD). The first proposal was not supported by the SRD, due in part to what the SRD said was a lack of genuine community consultation by Telus. The telecommunications company then changed the proposed site for the tower to Tla’amin First Nations Territory, south of Rexford Road.

Telus has received responses from many community members with a range of concerns and opinions. Those opposed are expressing a top concern: safety. Those that support the tower note the need for residents to reach emergency services, hoping the cell tower will increase cell reception on the remote island.

Dan Peters is a local resident who has responded to each consultation process with the same message: an argument against the tower due to safety.

“I don't believe that cell towers are safe. I've seen studies that display multiple categories of harm from cell towers and cell phones," Peters said. [And] those are things I trust more than studies utilized by a $7 billion corporation who's trying to proclaim that their products are safe. And I've also witnessed some of the harm firsthand in terms of work that I've done with youth over the last 15 years.”

Currently, the Government of Canada asserts that there are "no health risks" from cell phone towers and 5G.

"Based on the available scientific evidence, there are no health risks from exposure to the low levels of radiofrequency EMF which people are exposed to from cell phones, cell phone towers, antennas and 5G devices," the Government of Canada's website states. 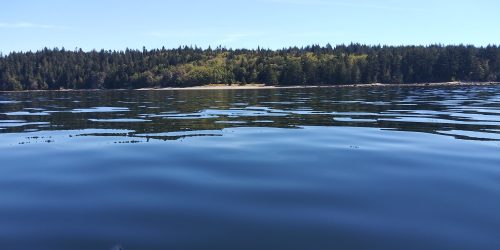 The third proposal from Telus for a cell tower is located on this Tla'amin First Nation Land. Photo by Loni Taylor.

Peters also wonders why Telus can't relocate the tower elsewhere on the island.

”The question just keeps coming up is, 'if they're so bent on towers on this island, even with the majority of residents refusing them, why can't they put them further away from houses?' It's not as if there isn't space on a large remote island.”

The past two proposals from Telus have seen the towers located on Pahkeeahjim treaty land. Representatives of the Tla'amin First Nation declined CKTZ's request to comment on the issue.

The current Telus coverage map already boasts full 5G coverage on the entirety of the island and surrounding waterways, but locals say that cell reception across the island is not covered. Telus responded to CKTZ's inquiry about the main purpose and capacity of the new cell tower.

“This cell site is part of a broader wireless connectivity initiative that TELUS has implemented along the Sunshine Coast and southern Discovery Islands over the past several years," Telus stated. "Once complete, this new site will dramatically increase cellular service throughout the region, including Manson Landing, southern Cortes Islands, and the surrounding waterways.”

Some locals report cell reception on Cortes is actually best in Mansons Landing's downtown core, the southern beaches and waterways, while residents are actually concerned about lack of coverage and 'dead zones' in central areas like Whaletown, Thunder Road, and Hague Lake.

“There's not much coverage. Basically, the only place you get reception for sure is Manson's Landing…Still none where I live and…it's such a hilly island,” said resident Rebecca Thacker.

Wesley Kirk is a local volunteer firefighter concerned about the lack of cell reception.

"I am for having a tower on the island for the sake of emergency response. My hope would be that there would be less dead zones, where people could call 911 from more regions on the island...There have been three such calls in the last while that were difficult to find because of the lack of cell service... The potential to save lives is increased, and sometimes just a minute or two makes all the difference. "

Telus will continue to accept feedback from residents. Cortes Island community members can contact Brian Gregg  (briangregg@sitepathconsulting.com) with their comments.

CKTZ will be following this story as it develops.

To hear more about the third Telus Tower proposal, listen to the CKTZ News Update below: