While hockey is often viewed as Canada's sport, baseball continues to see immense growth in both fandom and junior level registrations as the Toronto Blue Jays continue to fight for a postseason spot and British Columbia star Larry Walker is inducted into the Baseball Hall of Fame.

Since 2015 when the Blue Jays won the American League (AL) East division and made the postseason for the first time since 1993, Howard Birnie said registration to various leagues within the Toronto Baseball Association has been at an all-time high.

"I really think, with all my years involved, the biggest effect I've seen in baseball is a successful Blue Jays team that raises interest in the game," he said.

Birnie is a secretary treasurer and lifetime member of the Toronto Baseball Association, which traces back to 1913 as one of the oldest governing bodies of the sport in Canada.

With the Blue Jays in the mix for one of two wildcard spots in the AL after lengthy winning streaks starting on Aug.27, Birnie, who has been involved with the association since the 1970s, recalls the enthusiasm and increased interest in the mid-90s after the Jays' back-to-back World Series wins and in 2015 when the team returned to contention.

Birnie said the interest reached a point that in 2016 and 2017 leagues had to turn away prospective players because roster spots and facility capacity quickly filled up.

He said he sees the same euphoria in 2021 despite the COVID-19 pandemic, with the team rebuilt and the young core hoping to anchor a long-term contender.

Among the young core influencing the association's junior and amateur players is first baseman Vladimir Guerrero Jr., whose skill and "larger than life personality" resonate with the youth, according to Birnie.

Commenting on Larry Walker's hall of fame induction last week, Birnie said Walker is an example of Canadian-born talent working to make it the major leagues and excelling, another formative influence for the country's young players.

"He's[Walker] a very outspoken Canadian as he was the other day in his [hall of fame] induction, and I think that's a positive effect." 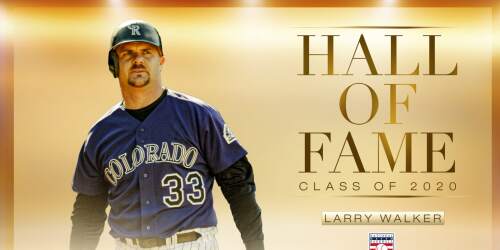 Larry Walker is only the second Canadian to be inducted into the Baseball Hall of Fame. The British Columbia native played the majority of his career with the Colorado Rockies. Photo courtesy of MLB.com.

Walker was a longtime Colorado Rockie and right fielder in the National League(NL). The British Columbia native entered the hall on his final (10th) year of eligibility on the ballot, receiving 75.1 per cent of the vote. Potential inductees must receive at least 75 per cent to become a hall of famer, and must get at least five per cent to stay on the ballot.

Walker is the second Canadian to be inducted, with the other being Chatham, Ont. native pitcher Ferguson Jenkins. Jenkins is the first Canadian to win the NL Cy Young award as the top pitcher in 1971.

For the association, Birnie is optimistic that registration will bounce back heading into next season as some restrictions loosen during the pandemic. Some games and tournaments were allowed to continue outdoors during the pandemic as physical contact is minimal and social distancing practices were in place.

The Blue Jays are 15-3 in their last 18 games, and are currently tied with the Boston Red Sox for the top AL wildcard spot. The team plays its final season home game against the New York Yankees on Sept.28.