The two incidents are unrelated. On October 8th, a homeless shelter in the forest behind the Vineyard Christian Fellowship Church, in Campbell River, caught fire. The blaze started in the structure’s homemade fireplace. Neither of the two occupants were injured, but RCMP Cst. Maury Tyre said the fire easily have spread to nearby buildings. The day before this, the Campbell River Mirror reported that the homeless encampment at Quinsam road will soon be served with a notice to vacate. 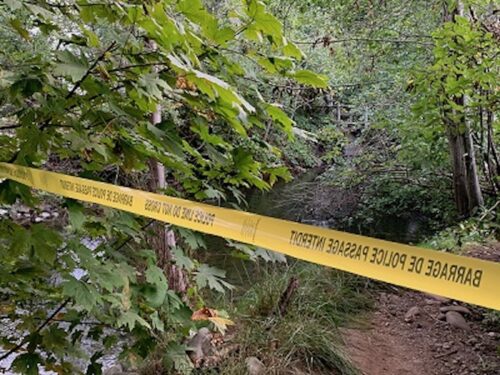 The most alarming incident, in the friction between Campbell River’s homeless population and members of the surrounding population, took place in the early hours of September, 22nd, 2020. A 20-year-old homeless male was set on fire as he slept underneath the highway bridge. He “managed to shed his burning clothing and made his way to the parking lot for help.” The man was treated for “severe burns to his back” and, when he returned to his sleeping place, found “some of his possessions had been removed.”

The people camping out are probably the most impoverished members of Campbell River’s homeless population, which numbers between 80 and 100.

In a recent interview with Cortes Currents, Sue Moen from the Campbell River Coalition to end homelessness explained that, according BC Housing, homeless people “ … are precariously housed, or couch surfing, or aren’t paying rent directly to a landlord. They may be sharing a room, but their name isn’t on the rental agreement. They don’t know if they’ll have housing for the next thirty days … Also, there are a lot of people who are living in vehicles, RVs, and some even in campsites.”

There are about 20 people currently living in the encampment on Quinsam Road.

Moen told the Campbell River Mirror that people camped at Quinsam Road “have nothing except their camping stuff.”

Constable Tyre agreed, “People are just trying to survive the best way they know how and in this case it’s not a sustainable option.”

They will be given the option of camping in Nunn’s Creek Park, where a city bylaw says they must pack up all of their belongings and leave every morning by 9 AM. Failure to do so could result in a loss of the few possessions they have.