Bears killed in Revelstoke this summer is a 5 year high

There were ten bears killed in the city of Revelstoke and surrounding area this season, and two of them were trying to kill horses within the city, according to Conservation Officer Services Sergeant Glen Kruger in Invermere.

This is a high since 2017 when the office started recording bear incidents. Kruger read out over the phone the numbers of bear deaths and relocations done by conservation officers, RCMP or the public to protect life and property.

2017: 5 black bears killed, 1 by RCMP because it was injured, probably on a highway Kruger thought.

2021: “Another busy year,” Kruger said. 8 black bear incidents. 6 were killed, 2 were caught and determined to be the wrong bear and relocated

2022: 10 killed, 2 were within the city of Revelstoke attempting to kill horses.

Kruger said unless noted, in this data only conservation officers killed bears.

Maggie Spizzirri, the Revelstoke Bear Aware Community Coordinator, said the organization's role is to educate the community about securing garbage and making sure bears aren't attracted into the city.

"It only works if we get notified soon enough before the bear is habituated to food," she said.

If the bear starts breaking into houses and vehicles and bluff charging, she said that's when COs relocate or kill them. If Bear Aware intervenes before them they show people how to secure their garbage, or pick fruit from a tree.

Complaints to COs about bears were up in general in the southeast of B.C., Kruger said.

Kruger thought it could be because the berry season could have been cut short because of the dry weather.

Conservation Officer Matt Hall said in an interview that the city of Golden and Revelstoke generally have similar statistics when it comes to bear deaths and incidents per year. But over the last few years the city of Golden provided residents with bear proof garbage bins. At the time of our interview there had been no deaths or problem bears in Golden for the entire season. 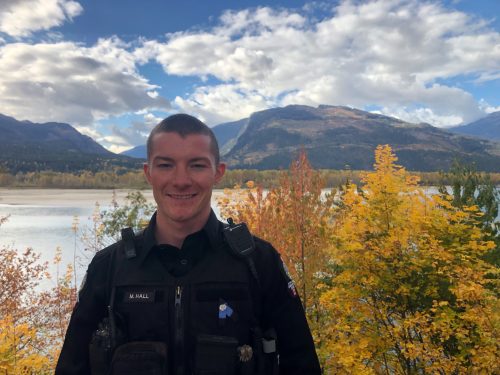 Matt Hall is the Conservation Officer. Photo by Meagan Deuling.

A few days later, two bears were killed in Golden, Kruger said. One was killing chickens in the Blaeberry neighbourhood, and one was habituated to garbage in town.

Kruger is hopeful that the city of Revelstoke will take a cue from Golden and get some bear proof bins, and he said he passed this information on to mayor Gary Sulz who was "interested to hear it."

Sulz said he's always pushing to get a conservation officer here in Revelstoke. Right now, it's covered by officers out of Golden and Invermere. Hall said Revelstoke hasn't had an officer for a long time, maybe the early 2000s. He's been working in B.C. for three years.

The mayor said he is interested in the city of Golden's bear proof bin program, especially how much it cost and how the bins work in cold weather. Sulz said he wants to reach out to Golden to have this conversation but hasn't had a chance yet.

StokeFM reached out to the city of Golden regarding when the bin program was rolled out and how it was paid for, and is waiting to hear back.

Aside from garbage, the biggest reasons bears habitually come into cities like Revelstoke is fruit on the trees. This city is full of cherry, plum, apple, pear, and a few nut trees. Revelstoke Bear Aware's gleaning program has been running for at least ten years.

Gleaning means, picking fruit off the trees or ground. This season they picked 3263 pounds of fruit from trees on 29 properties.

Goldie Rich has been coordinating the gleaning program for two seasons.  StokeFM went to meet her and around eight other volunteers one morning to glean a walnut tree. 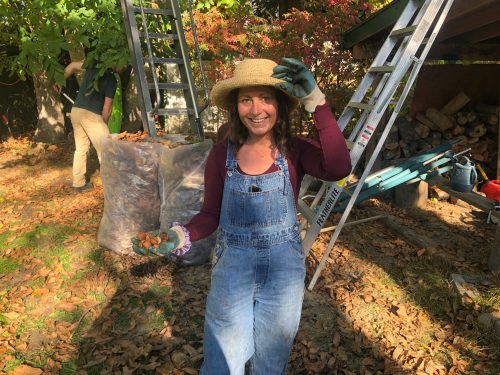 Most of the nuts were on the ground so we rustled around in the leaves to find them. There was a bumper crop of plums this year, Rich said. They picked 1200 pounds.

Spizzirri said 380 volunteers are signed up to receive emails about a tree being picked.

The idea of the gleaning program goes beyond getting the fruit off the tree. Bear Aware historically donated it to farmers for animal feed, and to the foodbank. Now that Community Connections' kitchen is open, even more of that fruit is being preserved and used.

The community kitchen processed 1410 pounds of fruit this summer from the program. StokeFM went one afternoon while chef Austin Luciow was making applesauce with crap apples and some other scabby green apples that had been gleaned, and some that came from the grocery store because they "weren't prime looking."

The kitchen allows Luciow to use fruit that people may not want to eat, making apple sauce, drying, canning it and baking with it. 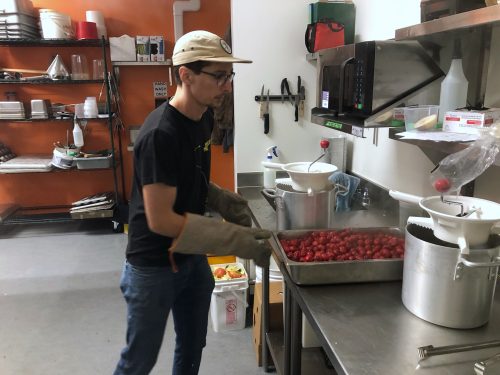 Austin Luciow is the chef at Community Connections' community kitchens. Here he holds a vat of hot crab apples. Photo by Meagan Deuling.

Along with fruit Luciow takes other food that the grocery stores in town would otherwise throw out. That week Save-On-Foods had given the kitchen "an insane amount of cream," he said.

The cream was about to expire so Luciow churned a couple vats of butter.

The kitchen opened at the beginning of June and it's been "going really great," Luciow said.

"This was the first time I was able to take the abundance of produce that we have and be able to process it and not see it go into animal feed and compost."

Along with baking for the food bank, Luciow's also making food for all the school breakfast programs.

For a version of this story that aired live on StokeFM with Lerritt Robinson and Jenn Kyle, click below.